(Part Three of the series, "The Fighting Yank Trilogy")
Chapter 91
This week, I've decided to postpone what I had planned to write, in light of recent meteorological events. Much of the northeast U.S. is still reeling from the effects of Hurricane Sandy, that slammed into the coast earlier this week. Despite being only a Category I storm, which was comparatively weak and slow, it was a big 'un. It became an extratropical storm, merged with a Western cold system, fed by the jet stream, during high tides boosted by an overhead full moon. It left tremendous damage to property from Virginia to Maine, left millions of people in the dark, and dozens of people dead.

There is still no comparison to the Great Hurricane of the Antilles, which wiped out over 20,000 people in the Caribbean in 1780; or Hurricane Mitch, which killed 11,000 Central Americans in 1998. Many folk that live along the Gulf of Mexico may have rolled their eyes at the nonstop news coverage of Sandy, for they may regularly endure several Category I storms a year, which usually warrant no more than putting your trash cans in the garage to keep them from blowing away.

But an extratropical Sandy hit New York, a seething cauldron of tightly-packed (and tightly-wound) humanity, few of whom are used to dealing with hurricane-force storms. An extended storm surge of thirteen feet swamped the low-lying island, inundating tunnels and subway tubes, drowning generators and shorting power lines. Considering how many people are jammed into its borders, the number of deaths is actually amazingly low.

We've been steeped in a week of bad news, shown countless images of flooded streets and twisted piers, and stories of people ill-prepared to deal with a regional natural disaster of this nature.

So this week, I'm going off-book and taking a break from the sartorial angle, to share some good news with you for a change: news that involves the little statue that stands in my little town, that you've been introduced to before.

I told you last year about how an artist named Ernest Moore Viquesney cast five statues called "The Spirit of the Fighting Yank" in 1943, and how my little town in North Carolina was inexplicably chosen to get one of them in 1946. The statue kept guard over Belmont High School for sixty-five years, (despite a defacement in the early 1960's that stripped the Yank of his Tommy gun,) until he was torn down by vandals in mid-2011.

Then, I posted a followup a year later, after the three culprits were apprehended, arrested, and sentenced (but not as severely as they should have been.)

The Fighting Yank was professionally pieced back together, and restored, after a fashion.

The Yank's Tommy gun was not replaced: as it turns out, the statue's insurance only covered its repair or replacement to the extent that it existed at the time of the vandalization: so he was restored without his M1928A1 submachine gun.

But it seems I wasn't the only person to notice its absence. Belmont City Councilman Ron Foulk noted, “It’s a shame for it to be up there and not be complete."

Belmont’s American Legion Post 144 agreed. They and Foulk raised $3,000 to re-hire Conservation Solutions to re-cast and attach the Yank's long-missing M1928A1 earlier this week. Many of the legionnaires were doubtless high school students in the early 1950's, when the Fighting Yank was in his glory.

Conservation Solutions conservator Zeke Schladen re-introduced the Belmont Fighting Yank to his firearm for the first time in fifty years. He installed the gun on the statue last Thursday afternoon.

Interestingly, the replacement gun was sand-cast; but the mold for the gun wasn't an original M1928A1 -- it was an Airsoft pellet gun, which is a perfect visual replica of the M1A1 Tommy gun. So if there are any parents who are offended at the presence of a gun at a (now) middle school, they can be mollified by the assurance that he's actually only holding a toy!

A close inspection of the other four full-size Fighting Yanks, as well as the various miniature versions, show some discrepancies among their guns: Viquesney wasn't slavish as to the accuracy of the Tommys he sculpted, although their silhouettes are instantly recognizable as Thompson submachine guns. So perhaps we shouldn't be too picky that the Belmont Yank's gun doesn't have barrel cooling fins or a muzzle brake, since despite that, it nevertheless now has the most accurate casting of any of the other four Yanks. 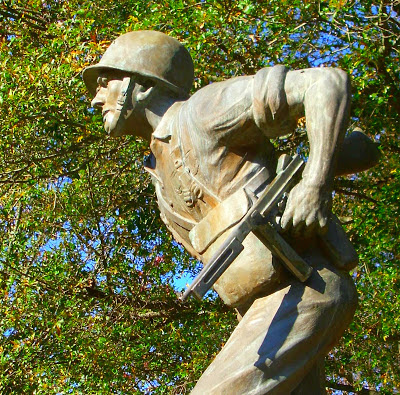 So our tale of the Fighting Yank has an interesting coda of good news, after all. Not only is the "Spirit of the Fighting Yank" now repaired, re-headed, and raised back where he belongs, the whole kerfuffle has raised enough interest in our little statue that after half a century, he's finally re-armed as well, complete and whole, as the artist intended. And hopefully he'll stand guard in Belmont for centuries to come, long after the statue's history of vandalism and the names of the culprits have been forgotten to the mists of time.

Click here to go back to Part Two of The Fighting Yank trilogy.

Click here to go back to Part One of The Fighting Yank trilogy.