(Part Two of the series, "The Fighting Yank Trilogy.")
Chapter 77
This is the conclusion of a story that began on July 29th of last year: the story of a famous little statue in an unlikely little town, and the tragic tale of that statue's destruction. If you haven't read it, go ahead, click the link, and do so now. Don't worry; I'll be here when you get back.

At the end of that article, I promised a follow-up when the miscreant (or miscreants) were apprehended, to validate my hypothesis that the criminals were dressed like children....as well as to give them the ridiculing they most richly deserve. My theory: men who dress like adults behave like adults, and don't behave like criminals: because criminals have a childish mindset and dress like children. Conversely, teaching a child to dress like a grownup from an early age might help stem the proclivity to criminal behavior.

Well, it gives me no end of joy to report that the bastards have been bagged.

On February 9 of this year, Belmont Police Chief Franklin concluded a 7 month investigation headed up by Lt. Basil Marett, resulting in charges being taken out on three malefactors in connection to the July 24, 2011 caper.

Lt. Marett, after a "significant number" of hours working on tips from local officials and others, interviewed the delinquents and obtained confessions: they parked in the middle school's lot, climbed the base of the statue, toppled it, stole the head, and tossed it into Dutchman's Creek. (Named for Dutchman James Kuykendall, who was given a land grant along the creek in 1754. The creek meanders through what is now called the town of Mount Holly, a mere six miles from the Fighting Yank's location.)

The Gaston PD's special scuba dive team scraped the Dutchman's Creek bed on Feb. 8, and found the smashed head in five feet of murky water under the Main Street bridge. They recovered four large pieces; as Marett put it, "like a jigsaw puzzle with a couple of parts missing.” 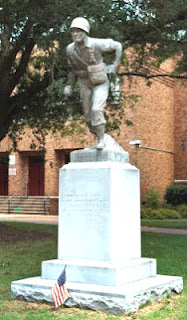 Conservation Solutions Inc. out of Washington, D.C., was able to piece the head together and re-attach it, at a cost of about $30,000. Inexplicably, the Fighting Yank's Tommy gun was not replaced, so I hesitate to call this a proper "restoration." It merely looks as it has been since its vandalization in the 1960s, not when it was cast in 1943. Why it was not properly restored is a mystery to me. Perhaps because it is on a schoolyard, and "zero tolerance" extends to bronze statuary?

If you ask me, I think the criminal charges are weak. Far too weak. Punnery aside, this was no "defacement of a public statue." Defacement is a bottle of spray paint and a brassiere. This statue was torn down and smashed. There's no coming back from that. There were five made. Five. You can't just go down to Statues-R-Us and get another one. If the Mona Lisa was ripped apart, you don't just paint another one, or tape the old one back together, and say "no harm no foul." This was wanton destruction of a national treasure.  Now it is a repaired and patched national treasure. It is not "fixed." It can never be fixed. The damage is done, forever. These cretinous imbeciles have left their mark on the fabric of the piece itself.

But nonetheless, the Fighting Yank stands proudly again, as he has stood for fifty years, cradling an (invisible) M1928A1 in one hand, lobbing a grenade in the other, steely eyes set against an unseen foe. But this time he has a security camera focused on him, and he's been more tightly tied into his monolithic base. Night-time lighting may be forthcoming as well, in a classic case of locking the barn door after the cows have escaped.

So, let's meet our three nefarious reprobates, and expose them to the burning spotlight of our mockery and ire.

First, we have the 18 year old Idiot Henry Diegert, seen here in his mug shot. He was born in Belmont, and lives in Mt. Holly. Surprisingly, he managed to graduate from East Gaston High School. His parents must be so proud. Let's take a look at Diegert's sartorial choices, and analyze his decisions. We can do this thanks to the wonder of Facebook, where anyone can see photos taken and approved by him, and placed in the public domain. In other words, these are the images he chooses to present to the world as representative of himself. 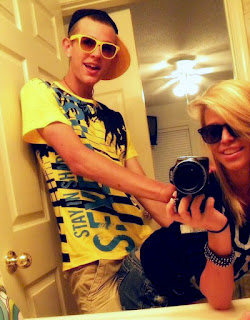 Sigh. Grit your teeth if you must, and we'll get through this. Keep repeating to yourself, "This is a picture of an adult." Eighteen years old. I won't drag his, er, friend into the issue, although she deserves all the ridicule she gets for choosing to hang out with such a worthless human. Besides, a simple Facebook search of his friends will quickly reveal her complete identity, so I don't have to. His glasses match both his shirt and cap -- the pinnacle of fashion, I'm sure. The sideways cap-skew is a daring fashion decision, as is the accessorizing of earring and necklace. He is without a doubt well-prepared for higher education. 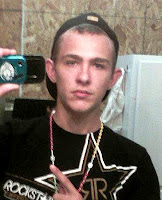 The self-portrait is the window to the soul. His baseball cap is not only backwards, but placed right on the back of his head like a yarmulke, and cunningly matched to his tee-shirt. His colorful necklace adds the splash of color. The choice of OSB plywood as a backdrop is doubtless a statement of deconstructivism and the fragility of societal norms. 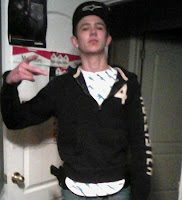 Ah, the poseur in all his finery. The cigarette cartons pasted to his bedroom door are the trophies of badassery. His Hollister sweatshirt shows him as a man of means, and the gang handsign shows him a man of business. His cap is turned frontways this time; he must be going to a job interview. His untucked tee-shirt cunningly conceals his two handguns. See, I bet you didn't even notice them.

Next, the mugshot of Justin Russell, 19 year old Idiot, another Mt. Holly resident who attended East Gaston High, but somehow didn't have the fortitude to see it all the way through. Shocking, I know. Let us see what wonders the Facebook lays bare for us... 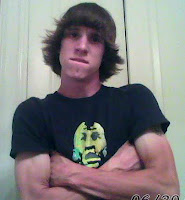 Hmm. Black tee shirt. Love of biceps, fear of scissors. And pensively chewing on his bottom lip. Yeah, no one could see this coming. If he had stayed in school, he would have been voted "most likely to bash in a statue for no reason whatsoever." 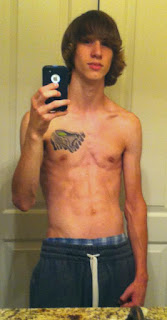 Our Third Stooge mugshot is Steven Morgan. An 18 year old dropout idiot originally from Canby, Oregon, before he infested Stanley, NC, several miles northerly from Mt. Holly. His expression says it all.
Morgan is a little harder to track online. He may have thought far enough ahead to wipe his Facebook account after his arrest...but it's probably more likely he just can't figure out how to use his computer.

Fortunately, he's popular enough to be included in others' photos. Here he is cozying up with his buddy the Idiot Russell, as he dangles a Yeungling Lager for the camera. They both apparently share a dislike of clothing. Forget dressing like grownups; they're like infants who won't keep their clothes on at all. Oh, and look, Russell can't be bothered to cut his hair, but has braces. Hey, Dad, how ya like where your money has gone? 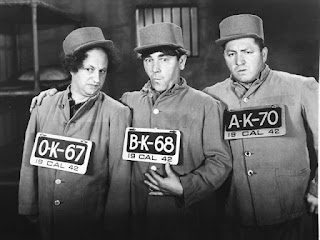 The Idiots Russell and Morgan, on the other hand, are getting off nearly scot-free with a plea deal:

Both have to pay $5,000 in restitution, which you will note is a mere third of the cost to repair their destructive spree. Mommy and Daddy better pony up, because you know these morons don't have any money of their own. They're on "supervised probation" for 15 months. Because, you know, that'll teach 'em. They agree to work 1,000 hours or earn their GED diplomas. Brilliant! Require them to do the absolute bare minimum through which every human in America can somehow manage to somnambulate. That's tough justice, that is. And each must complete 100 hours of community service in one year. That's an even better idea: force them to do good deeds as a punishment.

Oh, yeah, and testify against their co-defendants. So if Moe and Curly send Larry up the river and meet the terms, their charges will be dismissed, and they will be free to continue their lives of thuggery unencumbered by any correctional process.

If anyone is shocked or offended at the inclusion of the pictures of these "children," I say nuts. All three men are over eighteen years of age. They may look like bad-mannered twelve-year-olds, but legally they are adults. They can vote. They can enter into contracts. And they can choose to post their images in a publicly accessible manner. They are all criminals and felons who have committed a despicable act, dismissed charges or no, and they need to --they must be-- held up to a global audience of tomato-wielders. They have made their decisions, now they must live with them. Likewise for the persons who associate with them. "Lie down with dogs," and all that.

It's been a year in the making, but our tale of the Belmont Yank now has some closure. Take from it a cautionary fable. Apply it to your own sons, and if needs be, to yourself, before it's too late.

Click here to go to Part Three of The Fighting Yank Trilogy.

Click here to go back to Part One of The Fighting Yank Trilogy.