The Fighting Yank Is Laid Low

(Part One of the series, "The Fighting Yank Trilogy")
Chapter 25
Instead of droning on and on as per usual, imparting the wisdom of my age and experience, this week, I'd like to tell you a story. It's a true story, and will in some small way serve to illustrate the points I've been trying to make to you lo these many months.

It's a story of a small town in the southern Piedmont of North Carolina. Adjacent to Charlotte, it was first settled by Old Worlders in the 1750s, and called Fort at the Point. A hundred and twenty years later, this small town was a watering-stop along the Atlanta and Richmond Air Line Railway, and was called Garibaldi Station. Shortly after, Belmont Abbey was founded nearby, a school run by Benedictine monks. In 1883, the town's name was officially changed from Garibaldi to Belmont. In 1900, the town's population was only 145. And then came the textile mills. Nearby Gastonia had already undergone an industrial and economic boom, and was the center of textile production in the world. By 1930, there were twenty mills in Belmont, and the population swelled to 3,800. There were libraries and schools and parks, and the little town was doing pretty well for itself.

The little town got a statue, which it put in the yard of the Belmont High School. It was called "Spirit of the Fighting Yank," an eight-foot tall bronze, sculpted by famous artist Ernest Moore Viquesney in 1943, only 4 years after WWII began. While Viquesney produced many GI-themed pieces with the coming of World War II, most of them were miniatures: this was the only one produced as a life-size monument, and was cast by the Raphael Groppi Studio of Chicago. The statue depicts a U.S. soldier, ready to lob a grenade with his right hand, a Thompson submachine gun in his left, standing on a granite base engraved with the words ""Erected In Honor Of All Who Served In World War II And Dedicated To The Everlasting Memory Of Those Who Gave Their Lives."

In 1964, the High School grew too small for the population. A new high school was built, and Belmont High School became a junior high. Without any maintenance, the Fighting Yank began to show his age. The dark brown copper oxide surface began to show the warning signs of sulphation: light green patches on the horizontal surfaces where water pooled and ran off. The granite base became the victim of graffiti and neglect. The Junior High was rechristened a Middle School in 1997, and the Fighting Yank got a facelift. The granite base got a sandblasting, in any case; the Yank himself, although still standing guard, was marred by the run-off streaking of copper sulfides. Few paid any attention to the Yank, and even fewer knew who he was, who his brothers were, or Viquesney.

And so he stood, holding a silent vigil to the memories of the veterans of a long-forgotten war. For seven long decades, strong, silent, and ignored, galvanic corrosion setting in, as the zinc and copper in his bronze skin began its own slow electrical war.

Until earlier this week. 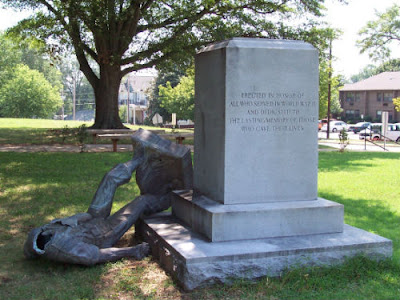 For reasons unknown, the Fighting Yank was brought down. Hurled from his pedestal in the night, his head was rudely hacked from his shoulders and stolen. Why was this done? Perhaps the vandal watched too much of The Simpsons, and thought there would be no real harm done. After all, when Bart defaces the statue of Jebediah Springfield in the town square, it's always there in the next episode. Or maybe, by virtue of a deficient education and a misunderstanding of  the word "Yank," he confused World War II with the Civil War, and avenged his misguided pride. Or maybe he just saw a big chunk-o-metal that might be melted down and sold for its weight in pennies.

I don't know the perpetrator or perpetrators, their age, ethnicity, citizenship status, education, height, weight, or color. One thing I feel absolutely certain of, however: I know how they were dressed.

Most likely a tee-shirt, shorts or baggy jeans, sneakers...in warmer weather, perhaps a hoodie. How can I be so assured of this? Because men in button-down Oxfords, trousers, and balmorals don't tear down statues. This is why parents need to dress their children properly. This is why the Coronet instructional films worked. This is why schools with mandatory uniforms turn out better-educated and better-behaved students. Dress like children, act like children. I will post pictures of these cretins when they are caught...and I will make an example of ridicule out of them.

I'll return next week with more sartorial goodness. Right now, I'm gonna go stare at an empty granite pedestal at the middle school...and wonder why I didn't pay more attention to the Fighting Yank while I had the chance. 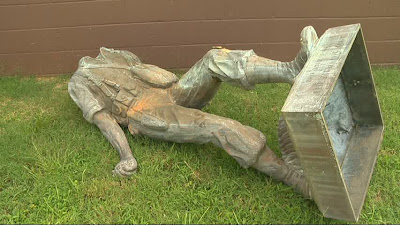 Click here to go to Part Two of The Fighting Yank Trilogy.