You Bet Your Ascot

(Part 6 of the series, "The Secret Life of the Tie.")
Chapter 84
Well, here it is -- you knew it had to happen sooner or later. Yes, this week is your introduction to the ascot, the little-known, seldom-used daytime-formal neckwear option. Long ties are universal, and bow ties are becoming common enough that you may see one everyday, and you should certainly wear one at least occasionally. But a man can live his entire life and count with the fingers on one hand the times he's seen an ascot worn, and those usually only in the sort of movies that his wife watches -- and most men will play out their span of years never, ever having worn one.

So woebetide the humble ascot, the orphaned neckcloth, the last remaining relic relegated to a bygone era of formalwear. It uniquely functions with one foot in the present and one foot in the past, but that doesn't mean it is a mode of clothing without purpose in today's world.

For who wears morning dress anymore? Precious few even know what "morning dress" is, or when to wear it. Many "fashion bloggers" think that daytime formalwear is dead and buried, a relic of the nineteenth century. Others think it is a rigid and proscribed thing, that must be followed exactly lest one look an uneducated and bumbling fool, or (worse,) a poseur who doesn't know what he's doing. Both, are of course wrong, in Your Humble Author's perfect and inerrant opinion.

Let's take a quick look and review a little, to make sure we're all singin' from the same sheet of music, so to speak. We've discussed evening wear a few times before, and critiqued countless celebrities, but rarely mentioned morning formals. Simply, formalwear is formalwear: the styles to be worn are different for daylight and nighttime, but they are worn to the same sorts of events. They aren't sombre or bleak, but party clothes, meant to be worn to festive events, balls, and situations where you should be enjoying yourself. The usual demarcation line is "before six" and "after six," but practically, it's the presence of sunlight when the event ends that counts. If the sun hasn't set when you're done -- morning wear. If the stars are out -- evening wear. Simple, in theory. 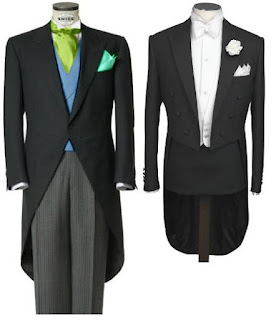 The morning dress suit, is directly equivalent to the evening dress suit. They serve the same function, and represent the same relative level of formality. The cutaway coat sweeps away from the waist button and is quite long: longer than a tailcoat. Rather than black, the morning coat is dark grey. The trousers are light grey, in stripes or patterns. The waistcoat has a high crossover. And the colors --oh, the colors! Quite unlike the military precision and stark monochromatism of the evening suit, there is a tremendous amount of latitude in cut and color and expression in the morning suit. Unlike evening wear, much more particular attention must be paid to the season, the weather, and the venue, to use colors and patterns effectively. 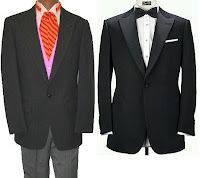 The stroller suit is likewise the direct equivalent to the dinner suit. It is considered "undress," and in fact the stroller was not too long ago everyday business wear. In its particulars it is identical to the morning suit, with the exception of the jacket, which is not cut long. It usually has peak lapels and a single button, and is Oxford grey.

There are some critics that will descry the use of an ascot with a stroller, claiming that as an undress suit, it needs a fold collar and simple long tie. My response to that is simple: really? You wear a long tie every day of your life, you have one opportunity to wear a stroller, and you're gonna stick with another long tie? I say paugh to the pundits and nay-sayers: if you have an opportunity to wear morning dress, for crying out loud, for the sake of all that is beautiful and good in the world, wear it with an ascot. 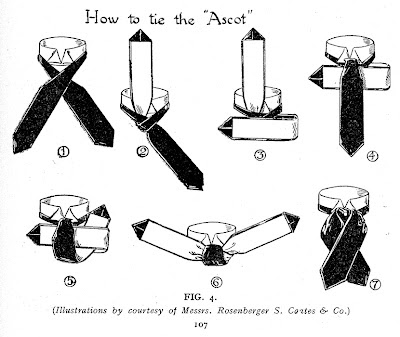 That being said, let's look at the ascot itself. There is nothing more piteous than a pre-tied ascot, especially now in the twenty-first century when you may only have one opportunity to wear one properly! Study this diagram until you fully understand it. It's important. We will be referring to these seven steps throughout the remainder of this post. 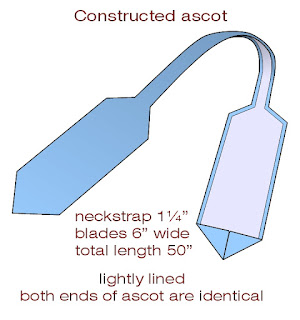 You'll notice that an ascot isn't made like a long tie. For one thing, both ends are wide. You can purchase ascots today; most of them look like this, with wide paddles, a thin neckstrap, and a definite "right side" and "wrong side."

This, of course, makes the ascot a single-purpose item. Factor in that they are not inexpensive pieces of neckwear, and you have a couple choices ahead of you. The first is to make one yourself, or have one made for you. This illustration should tell you everything you need to know. 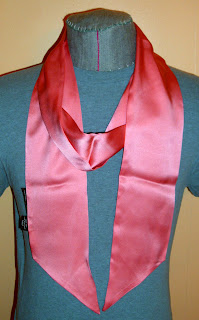 The other option is to do it the old-fashioned way, with a single piece of fabric. I picked this up at my favorite secondhand store. It's a woman's scarf, (I won't tell anyone if you won't,) silk, 4" by 70", and it's absolutely perfect for this purpose. It's just what would have been used historically. Like the rest of my tie demonstrations, I'm tying right on my tailor's form, without shirt or collar or waistcoat to get in the way of a clear view. Remember these are all worn with a waistcoat -- no exceptions -- and the collar can be either stand or fold. In keeping with the day/night symmetry, I would go with a stand collar for morning dress, and fold collar for the stroller, but that's just me. There are no hard and fast rules, really, and don't believe anyone that says there are. There are only traditions, and those traditions are not nearly so ingrained in morning dress as they are in evening dress, 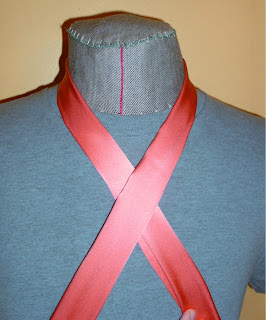 The first step is to fold the scarf over twice, to make a strap of about an inch to go around your neck. In the above diagram, this is Step 1, just before the LiCo maneuver in Step 2. 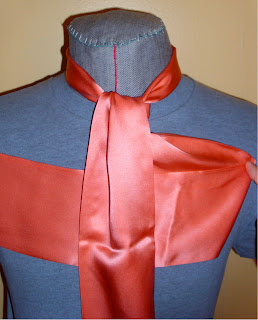 This is Step 4. At this point, take the two ends and unfold them to their full width. 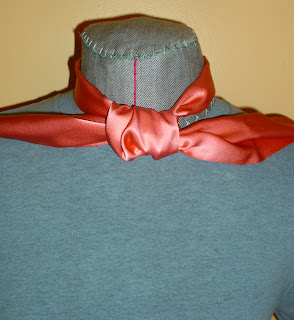 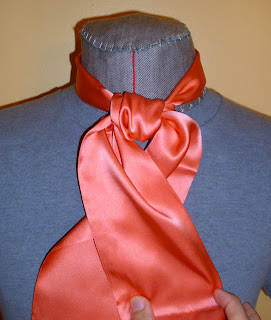 ...and this is Step 7, with the ends crossed and ready to pin to the shirt. A stick-pin is traditional, put through the two blades just below the knot, that hold the knot in place. 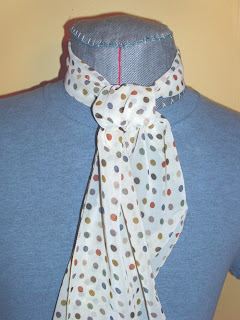 To answer your next question, (you were going to ask a question, right?) this is the same knot, made with a scarf of single-thickness. These types of scarves are readily available, so it'd be great if they would work, but they are just too diaphanous and lightweight to hold the knot. You'd really have to go with a thick silk of double-thickness to tie an ascot, short of buying a purpose-built model. 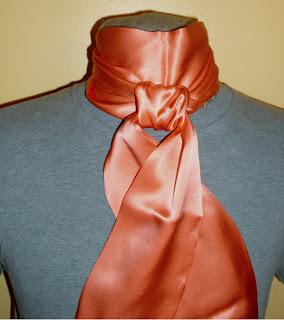 If you've done your homework and studied the cravat constructions of a few weeks ago, the ascot should seem oddly familiar to you. Yes, this same knot, with a front-to-back-to-front wrap, is none other than a Cravate à l' Anglaise -- an unstarched Nœud Gordien cravat! 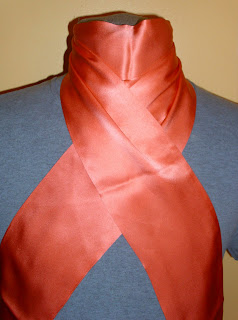 You can replicate all the classic cravats with a scarf like this, like this cravat à la Paresseuse. They have limited practical use because of the high neckline, BUT, with a high standing wing collar, you could have a bit of fun with a traditional cravat...at the right venue, when such a knot would be seen as a charming eccentricity, and not a gauche error in judgement. They tend to look more pleasant to modern eyes without the starch, but again that's just my opinion. 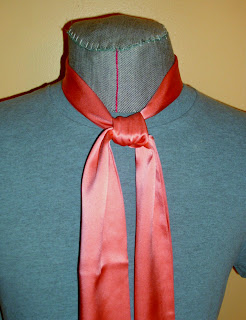 While we're talking about traditional knots, keeping the scarf folded along its length, and tying it in a simple square knot, results in the Steinkirk of yore, that we've looked at before. 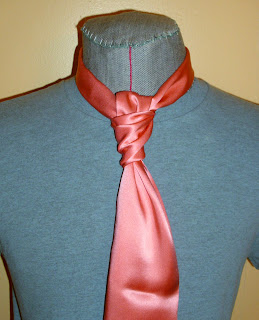 The Ruche tie, which is simply an ascot tied like a four-in-hand, is sometimes used where the ascot would seem too showy, or where the personality of the wearer is not strong enough to carry off a true ascot. Some prefer the Ruche with a stroller, but as mentioned before, I don't hold with that. This example is tied with a Cross Kelvin knot, for a bit more interest. 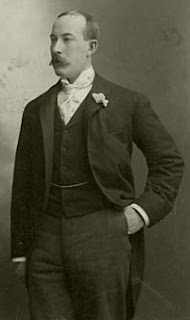 The Ruche has roots in history, as this photo shows: it's not just a short-cut for those that don't know how to tie a proper ascot. Still, the universality of long ties makes the Ruche a bit twee as a formal option. I'd sooner wear it with an everyday suit! 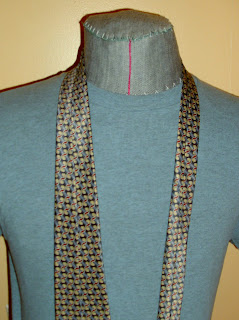 The ascot can be approximated with a long tie. Although not my first option when others are available, this demonstrates that it can be done with acceptable results in a pinch.

Why you'd find yourself at a daytime formal event with a suit but not a tie, I have no idea -- but in the interest of the acquisition of knowledge, I'll show you how it's done. 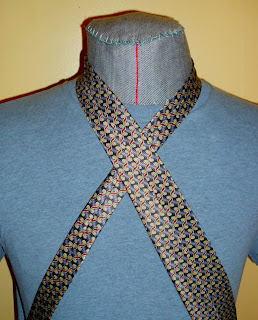 We start inside-out and backwards, tying the thin end around the thick end. This would be Step 1. 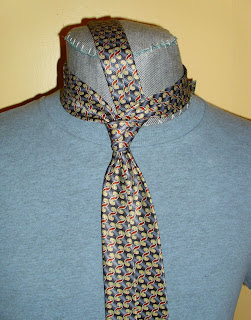 Step 2 would be a LoRiCo movement, like the beginning of an Oriental knot. 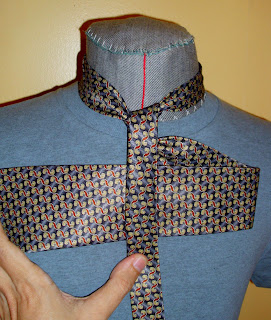 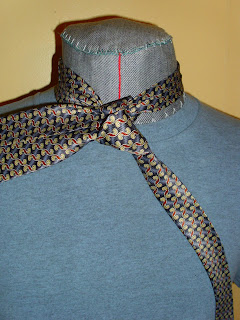 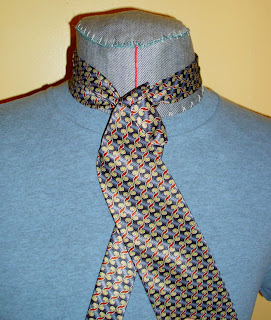 ...and Step 7, ready to pin. As you can see, the thin end is completely covered by the thick end. With a stand collar, the neckstrap would have to be twisted so its right-side out, but it gives a very nice shape overall: the thick tie lining gives the knot some geometric interest. 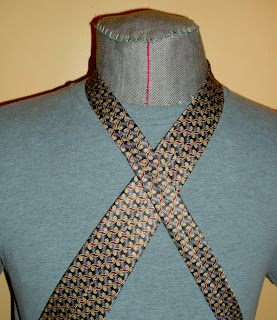 The other method "normalizes" the tie ends, with the thick end tying around the thin end, also with a LoRiCo. It also starts inside-out. This is Step 1... 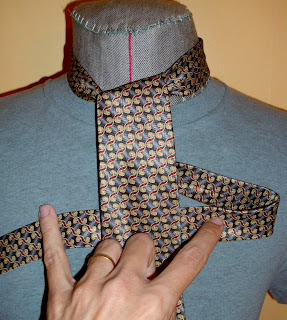 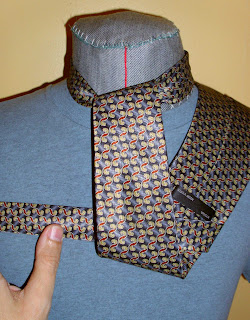 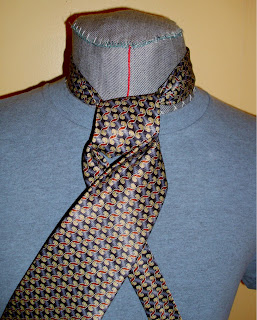 ...and Step 7. The knot is large and square, and gives a much different ascot effect. This version looks nice with a fold collar.

So, to answer the rhetorical question posed earlier, who wears morning dress anymore? The answer: you can, if you go to the right venue. Full morning dress is still worn occasionally for daytime weddings in Europe and the UK, although strollers would most likely be the suit of choice for most American venues. Day outings, wine tastings, garden parties, luncheons, picnics, all hold promise for formal fun. If you want to exercise your right to formality, in most cases you'll have to be the instigator. Find a group of like-minded chums (or chums with like-minded wives, if it comes down to it,) and organize your own. You may have to blend in a few evening events to exercise those dinner suits as well. A Superbowl party with ascots and striped trousers? Why not? Why not, I say?

Next week, we'll look at some more obscura, but this time, one that is much easier to actually wear. Stay tuned!

Click here to go to the next essay chronologically, Part Seven of The Secret Life of the Tie.

Click here to go back to the previous essay chronologically, Part Five of The Secret Life of the Tie.