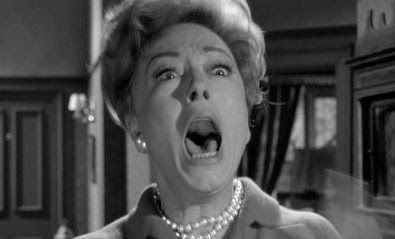 Cue the theremin music and fire up the fog machines! Our yearly tradition is back -- the worst, most egregious, baddest, most doubleplusungood thing I've had the dire misfortune to witness since, well, since last Halloween.

That event has led to many scary things I've seen this year; and they look to be shaping into a complex political coverup that would be right at home in a cheap B-thriller horror movie. But our focus here is on Dressing Like A Grownup!, and Islamic terrorists dress as you would expect them, and sheriff's deputies wear their uniforms. So as grisly and stomach-churning as these events were, we have to look elsewhere for a sartorial horrorshow.

And we have one.

On the 18th of this month, the Alfred E. Smith Memorial Foundation held its 67th annual dinner at the Waldorf-Astoria in New York. Founded by Francis Cardinal Spellman in 1946, to honor the memory of New York Governor Al Smith, the Foundation is a Catholic charity that assists the neediest children of New York. But the dinner is primarily known for two things: every four years, it hosts the two Presidential nominees, who spend the evening telling jokes.

And it is a genuine, honest-to-goodness white tie affair. Dress suits, tailcoats, full-formal, whatever you want to call it, it is one of the few occasions that demands the dressiest of traditional clothing, with no short cuts. Most people would not notice what actually went on that evening. Everyone had fun, the candidates were both in rare form and actually blazingly funny, and the money all went to a good cause. So who cares what they looked like, really? After all, there was no red carpet, no paparazzi, no questions of "who were you wearing?" After all, it's just a tailcoat.... 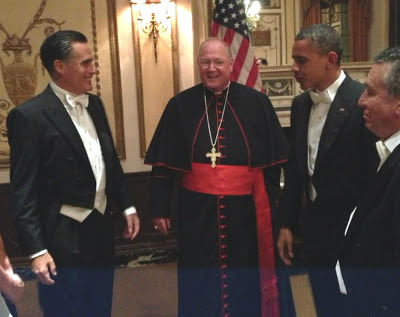 Wrong. Dress suits are the closest thing civilians have to military uniform. It's still party clothes, make no mistake; but there are explicit rules. These rules don't exist to make life needlessly difficult -- they are there because White Tie, done properly, is the ultimate expression of the First Great Secret of Dressing Well: it makes you look better than you really do, all the time, without exception -- if it is done correctly. These two men, vying for the position of head of the most powerful nation in the world, should know a thing or two about dress suits. Neither of them do. Governor Romney, joking about his wealth, said "It's nice to finally relax and wear what Ann and I wear around the house." A good line, but it's apparent that he's never actually worn a dress suit before. And neither has the President. 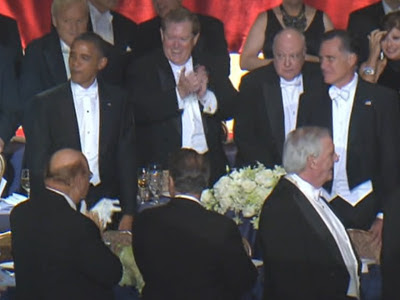 It's painfully obvious that no one there has ever worn white tie and tails; because they are all getting it wrong. Coats are baggy, shirts are unstarched, waistcoats are too long. It's as if they were all at a high school dance...or Halloween party. No one knows what the hell they are doing. No one. And that's scary. 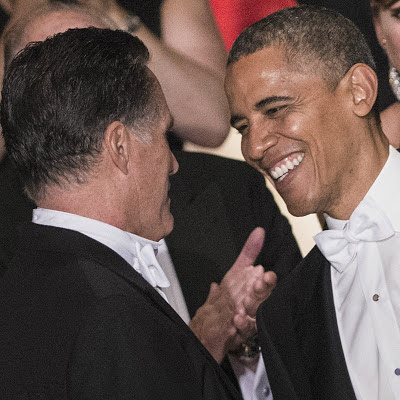 The President of the United States is wearing an unstarched fold-collar tuxedo shirt and pre-tied bow with his tailcoat. Which, sadly, is what the waiters would be wearing, to differentiate themselves from the guests, in decades past. Romney is also wearing a tuxedo shirt, with skimpy attached wing collar. His bow tie neckband is riding over the top of his coat collar, and is nearly jumping free of his shirtcollar. If these were fifteen-year old schoolchildren playing dress up with the clothes in their grandfather's steamer trunk it would be merely humorous. These are grown men, and it is nothing short of tragic. 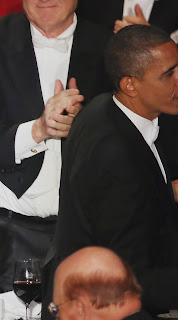 But this brief image is proof that we are witnessing the next Fall of the Roman Empire. Directly behind the President is seated Chris Matthews. I don't even know how to register my complete and utter disgust. This is a full-dress event, and Matthews can't even be bothered to wear trousers? Let this image of low-rise belted pants scorch into your retinas, his shirt billowing out under his waistcoat, his cutaway fronts flapping impotently across his distended belly: this is the image of the tail end of Western civilization. 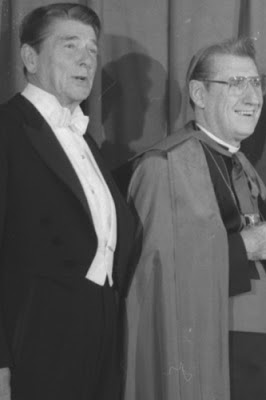 Let us now compare this evening of atrocity to images of Presidents past, who have attended this selfsame dinner, wearing the same dress suits, but wearing them correctly. Notice President Reagan's dress suit, and how it is cut across the waist. The trouser waistband is high, the waistcoat is cut to be just shorter than the fronts of the tailcoat, and the angle of both are identical. 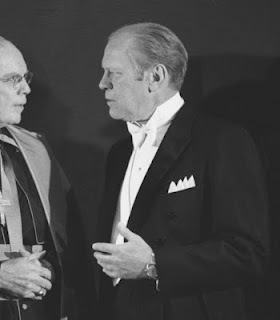 Now observe President Ford's shirtcollar. It is starched, detachable, and much taller than that worn with a dinner suit: a full two and a half inches, with broad, elegant wings, and a broad, elegant bow tie to match it. His pocket square is arranged with nearly Razor Square precision. 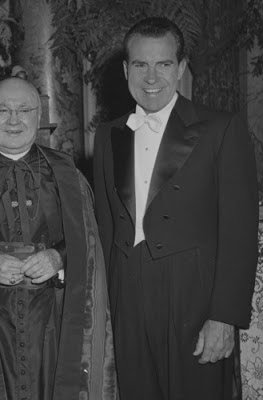 Turning our attention to President Nixon, take a close look at the cut of his coat. This is why a dress suit must always be made bespoke. Notice that the sleeve falls without so much as a wrinkle. Notice especially the shaping through the chest and torso, the precision of line, the sculpting of the cutaway that looks molded to his body: the very definition of a body coat. Now compare this to the first picture of Romney above. 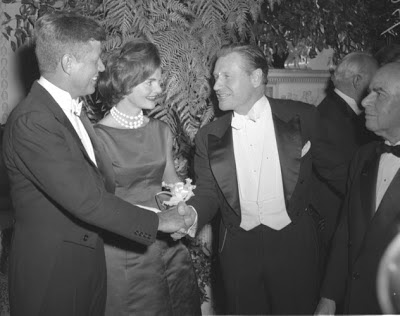 Now we'll step back farther, to President Kennedy. The thing to see here, is how the coat acts when in motion. Kennedy is reaching his arm forward, but the coat still holds to the small of his back, the tails follow the curve of his hips, and the cutaway points stay in place like they were welded there. Now look at the other fellow, who has both arms out, one in a handshake, the other on another gent's back: but his coat does not billow out, and stays snug into the waist. Notice, too, that he is starched from chin to navel -- the shirt front and waistcoat are both stiffly starched pique marcella, and neither his shirt nor his waistcoat shows as much as a wrinkle, despite his half-twist forward from the waist. One last detail: the man at the far right is not in a dress suit: he's in a double-breasted dinner suit. Is he a waiter? No, more likely a member of the media; you see, it's perfectly acceptable to wear a dinner suit to a full-dress event if you cannot afford a proper dress suit. (Memo to Chris Matthews.)

How have we descended so far, that at a White Tie dinner with the President of the United States, no one knows how to actually wear White Tie? The answer is, "down a long, gentle slope." White tie isn't difficult -- on the contrary, it is very simple. There is absolutely nothing to cause confusion. Step A, step B, follow the rules, and everything from cut to proportion to size to materials is clearly laid out for you, as simple as a Marine's uniform, and the result is guaranteed to be visual perfection.

Grown men don't know how to wear anything, anymore. Welcome to an era when even statesmen, Presidents, captains of industry, and media professionals can't follow a simple set of directions that have been set in stone for over a century.

And if that isn't scary, well then I don't know what is.