Scarf it Up, Scarf it Down

(Part 9 of the series, "The Secret Life of the Tie.")
Chapter 88
The past two months has been quite a ride, hasn't it? I'll bet you've learned more than you ever wanted to about the history of neckwear. We set the WABAC machine for half a millennium ago, and surfed the waves of change through the centuries, through fads and fancies, loose and carefree to meticulous and starched, as the pendulum of change swung from one extreme to the other and back again, over and over.

Then we took a methodical and exhaustive look at what people wear today -- but with a solid grounding in history, we begin to see the connections to not just what people wear, but why. Nothing exists in a vacuum, and the progression of fashion has echoes going back not just the mere five hundred years that we've espied, but right back to antiquity. Men today are the same as they ever were, with the same impulses and desires and senses.

This week, we are leaving the present day and projecting a bit into the future. A tricky business, that: the vagaries of fashion oft take strange and unexpected turns -- but we can begin to see some trends among the fashionistos and glitterati, that will doubtless trickle-down to the masses afore long, and if they take root and germinate, we may begin to see a shift in what is worn generally.

So this week, let's let the images speak for themselves. 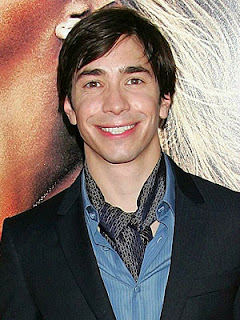 Here is Justin Long. Not exactly an A-lister, but note two things: his day cravat is a scarf, and it is loosely tied in a simple knot -- certainly not how a day cravat is usually tied. This wouldn't usually interest me, but take another look... 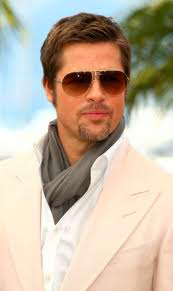 ...this time at Brad Pitt. Quite definitely an A-lister, but note also two things here: he is wearing a scarf as a day cravat, tucked in and all, and the nature of the knot. It is a simple slipknot -- the scarf is doubled, with both loose ends on one side passed through the loop on the other side. 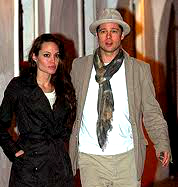 Here's Brad again, this time with a tee-shirt and jacket. But look! The scarf remains, a very long one in fact, tied in a slipknot. 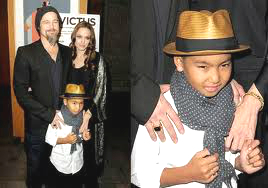 Even the little Pitt is getting into the act.

Another fashion forward fellow, once-famous David Beckham. In evidence, a scarf in a slipknot. This is a regular sort of warm-weather scarf: notice that the doubling-up makes the scarf quite short, and rather bulky about the neck. One might think this is merely for warmth... 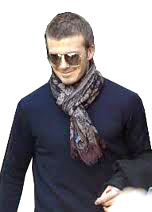 ...but here he is again, in shirtsleeves, with a thin silk scarf tied the exact same way -- short, in a slipknot. 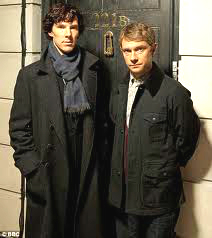 The entertainment media, whether leading the charge or following the pack, is echoing this trend. Note the new Sherlock Holmes sports this exact same scarf style: short, doubled, and slipknotted. 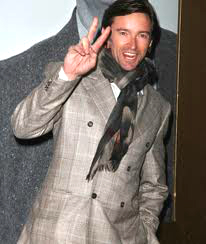 The conspicuous inclination here isn't merely that there is more scarfitude hereabout, or even that said scarves are being worn short. Notice Hugh Jackman here and the other examples I've shown. The scarves are worn under shirts or jackets, or over crewneck shirts -- but never, ever worn with a tie. These scarves aren't being worn for warmth, under a Chesterfield overcoat: they're being worn as neckwear. 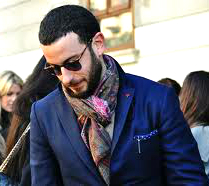 Could we be seeing the next formative step in tie evolution?

We very well could be. The scarf gives a sense of protection to the neck and bulk to the upper chest -- something men are hard-wired to gravitate toward. At the same time, it enables the shirt to be worn open, and the casual bent towards open collars in recent years is undeniable. The slipknot is embarrassingly easy to tie, requiring no specialized skill or knowledge at all. And although it looks bulky to my eyes, it must be remembered that cartwheel ruffs were once embraced by men as highly fashionable as well. 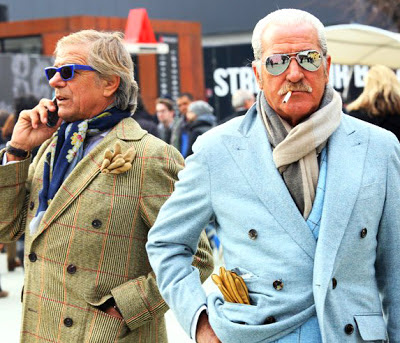 Could it be that we're seeing the final passing of the age of the collar and tie that has endured since the Victorian era, as the pendulum swings backward again to the elaborate neck-wrap?

Only time will tell if this sudden scarfiness is merely a novelty, on par with the leisure suit craze in the mid-1970s, or if it has the staying power to become an enduring fashion that will be remembered by future generations as the hallmark of the early twenty-first century; as tall Arrow starched collars and four-in-hand knots were the hallmark of the early twentieth.

And why not? We could do worse.

Click here to go back to the previous essay, Part Eight of The Secret Life of the Tie.