The Kentucky Derby: or Why The British Hate Us

(Part Twelve of the series "Dressing the Average Guy.")
Chapter 66
This past week, if you were paying attention, was the 138th running of the Kentucky Derby in America. There were horses, there was gambling, there was a two-week-long party resulting in various stages of inebriation. But most importantly for us, there was a cautionary tale writ large within which we can take an important lesson about dressing, not merely well, but Like a Grownup.

The Kentucky Derby is frequently compared to the UK's Royal Ascot, but to prove our sartorial point this week, we need to run a brief comparison betwixt the two venues first.

The Kentucky Derby Presented by Yum! Brands is held on the first Saturday in May. It is the first leg of the US Triple Crown: followed by the Preakness and the Belmont Stakes. The attendance at the Derby in Churchill Downs, not surprisingly, surpasses the attendance of all other American stakes races. (Yum!, who sponsored the race this year, operates Taco Bell, KFC, Pizza Hut, and WingStreet. Based in Louisville, Kentucky, it is the world's largest fast food restaurant company.)

Ascot is the foremost track in the United Kingdom. It's six miles from Windsor Castle, so it has close ties with the Royals. Up until 1945, the only event there was the four-day Royal Meeting in June; but today hosts 26 days of flat and jump racing through the year. Royal Ascot is still the big one, though, going all the way back to 1711.

So both events are big deals in their respective countries.

Churchill Downs has many different price levels of seating, from the dizzyingly expensive Millionaires Row with all the amenities included, gradating down through Skye Terrace, the Turf Club, and the Clubhouses, to the Grandstand seats, to general-admission in the infield. The only dress code is "business casual," a catch-all which really only specifies a blazer and collared shirt, and only applies for reserved seating. 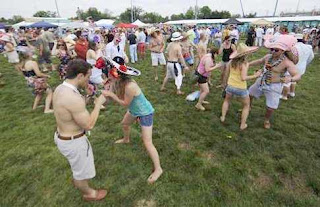 The infield area has no dress code at all, with predictable results. We shall ignore them.

Ascot, on the other hand, has three degrees of seating for the Royal Meeting weekend: the high-security Royal Enclosure, the Grandstand, and the Silver Ring; and each has a pretty comprehensive dress code. Most people are familiar with the Royal Enclosure's requirement for black or grey morning dress. Top hats are required but may not be "customized." The Grandstand requires a suit and tie, and the only requirement for the informal Silver Ring is to wear "smart clothes," and bare chests are prohibited. Also, the Royal Weekend stipulates that "fancy dress, [what Americans call costume,] novelty and branded / promotional clothing are not allowed on site."

So both events have dress codes, are considered a dressy event for those at the top-tier tax bracket, but the requirements get lax for the proles in the cheap seats.

And, believe it or not, both events are costume parties for the spectators. Despite protestations to the contrary, Ascot attire is costume. The difference is, Ascot can get away with it, while the Derby cannot.

In brief, it's the working-out of the Great Secrets of Dressing Well.
If you remember back to the very first posts of this blog, the Dressing The Average Guy series posited two Great Secrets: The First, The purpose of clothing -- the very reason for raiment itself -- is to make you look better than you really do. The Second, Left to himself, a man will always dress back to the era when he was happiest -- or imagined himself happiest.

The Third Great Secret is not for the novice or the faint of heart. We have seen it spelled out again and again in practice over the past year. I alluded to it in Chapter 18, but only now that the Average Guys of a year ago have graduated to grander things, do I dare set it down: A man cannot break the rules successfully, unless he knows exactly what those rules are.

In an unusual turn for us, we'll look to the gals for the most obvious example of this.


At Ascot, the women's ridiculously lavish hats blur the line between fashion and costume. Certainly, they're not suitable to wear anywhere else. It's become a sort of Royal Ascot trademark, and it is unique for that event.

At the Kentucky Derby, where there is no specific dress code, it is telling that the women's fashions include the same sort of absurd headwear, a la Ascot. That is the unbreakable link that has been forged between the two events -- the dress at the Derby apes that of Royal Ascot. Although not spelled out, the message is clear: we are pretending we are dressing up. Women are used to wearing absurd costume exactly once, pretending it is totally normal, and we are used to seeing it. Men are another matter entirely. 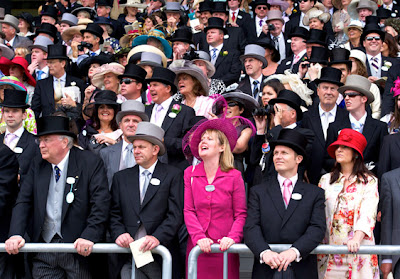 Morning dress, insasmuch as it is unlikely to be worn anywhere else the entire year, is also a form of costume, albeit one whose form and function have been set down in stone for decades. Even in the Grandstand and Silver Circle, many men opt for morning dress at Ascot, even though it's not required. Notice that the suits, morning wear, or what-have-you, don't overpower the gentlemen wearing them. Although odd to see swallowtail coats and top hats in use, it doesn't smack of the absurd.

This doesn't assume the men are any more well-behaved than Americans, however -- brawls among the suited are increasingly common, although the top-hatted folk have largely managed to keep themselves in check. 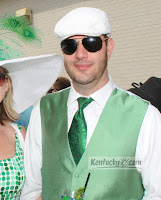 Compare this to the average man's attire at the Derby.

It cannot be more obvious that these outfits will be worn exactly once: for the men wearing them are painfully self-conscious and self-aware of their ridiculousness.

They are children dressing up in what they think is a grand Southern style, tittering to themselves and grinning like fools. 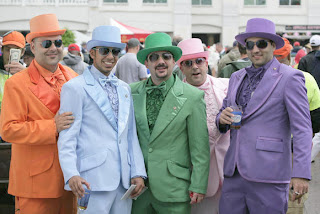 They are, in short, at a costume party.

This in itself isn't a bad thing; there's nothing wrong with indulging in a bit of hilarity. The ensembles themselves, at times, aren't horribly garish. 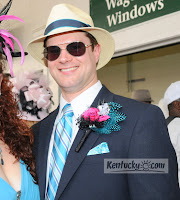 They can be bright, cheery, and a good deal of fun. Here's the rub, though: It is apparent from the images who is used to dressing well and is bending the rules to give a light and breezy appearance, and who has never worn a tie and jacket before.

Some of these man-boys don't have a clue what they are doing. 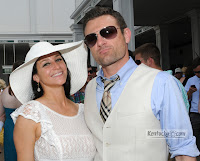 It is possible to Dress Like A Grownup, and still have a good time with a festive suit. As with everything, it distills down to the ability to strike a simple balance. 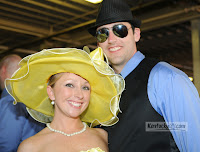 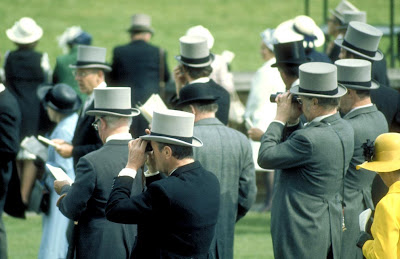 Click here to go to Part Thirteen of Dressing the Average Guy.

Click here to go back to Part Eleven of Dressing the Average Guy.

Note that many of the photos of average Derby racegoers are from kentucky.com. As is usual when I show non-celebrity images, I recognize that some may not want their faces shown outside of the original venue. This blog's all in good fun, but if you see yourself here and want your face redacted, just drop me a comment, and I'll remove it!
Posted by Mr Thompson at 1:00 AM