(Part Thirteen of the series, "Dressing the Average Guy.")
Chapter 71
You might think this week would be my traditional look at recent formal awards ceremonies in the media, for there have been a couple noticeably influential ones: The Tonys and the Cannes festival. In fact, that was my plan going into this week: but something much more interesting has come up. Besides, we've covered formal wear quite a lot this year, and there's much more to Dressing Like A Grownup than mere tuxedos.

The impetus for this week's change of venue was a typical sort of what-are-the-stars-wearing feature on the web's MSN. At first blush, just another filler article chock-full of jiggling Kardashians. "Stars who don't dress their age," or some such fluff. Nothing to see here, move along. But then, a fascinating subtext hit me across the face, and I knew it had to be this week's installment -- for this is a perfect, in-your-face, textbook example of the Second Great Secret of Dressing Well.

For those of you unfamiliar with the format, last year, I posited Great Secrets, that the average guy who was just getting started along the path to sartorial excellence needed to know. The first one would seem to be common sense, despite millions of men who ignore it: "The purpose of clothing...is to make you look better than you really do." The second one is cautionary in nature, and a warning: "Left to himself, a man will dress back to the era in which he was happiest, or imagined himself happiest."

So let's look at some fabulously wealthy famous men -- who are in the media's glare, have the public's eye, and can easily afford to wear anything, absolutely anything, they want. Given an entire planet full of fashion with hundreds of years of clothing history, what do these men choose to wear when they could wear anything at all?

Let's start with John Christopher Depp, II. Johnny is 49 years old now, born June 9, 1963. He got his start in the mid-eighties on 21 Jump Street, but didn't really hit his stride until he teamed up with Tim Burton on Edward Scissorhands in 1990, when he was 27 years old. What followed was Depp's decades-long golden era of movie after successful movie. Now observe his choice of clothing. Does this look like the suit of a 50 year old screen actor, or a 27 year old bleeding-edge hipster circa 1990? Behold the Second Great Secret in action! 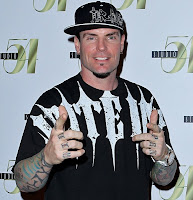 Similarly, Robert Matthew Van Winkle was born October 31, 1967. In 1990, as "Vanilla Ice," at age 23, "To the Extreme" became the fastest selling hip hop album of all time. (Let that sink in.) After a failed suicide attempt in 1994, he re-evaluated his life, got married, and focused on motocrossing and jet skiing for awhile. He then studied real estate and renovates and sells houses. But do you see a 45 year old realtor here? Nope, from the askew hat to the annoying soul patch to the sloppy skate duds, what you see is a hippy-hoppy teenage kid in the late 1980s -- which was Vanilla Ice's Camelot.

What is this, an age-progression of Miley Cyrus? No, it's fifty-nine year old Philip Andre Rourke, Jr., who was born September 16, 1952. Poor Mickey was perhaps too good at everything he did. From 1964 to 1972, Rourke was an amateur boxer tallying up 27 wins (17 by knockout) and only 3 defeats. He then turned his attention to acting, and by the mid-1980s, thanks to Kim Basinger and 9½ Weeks, he was a bona fide leading man. In 1991, Rourke decided that he "had to go back to boxing." Following some messy bouts in the ring and facial reconstructive surgery, in 1995 he retired from boxing and returned to acting, where plastic surgery was more "voluntary" and less "life-saving." With multiple acting awards and boxing wins under his, er, belt, this outfit is befuddling. It's certainly not the dinner attire of your average 60 year old male. Whether it's that of a brash 18-year old boxer in 1970, or just the sad result of forgetting your pants due to one too many blows to the head, is something only Mickey knows.

Adam Richard Sandler was born September 9, 1966. He was hired as a writer for Saturday Night Live in 1990, when he was 24. After making the move to the front of the camera, he rode the wave of popularity to the silver screen in the late 1990s, in such films as Billy Madison, Happy Gilmore, The Waterboy, and others. He's 46 today, but his attire still dates him as a post-teenager in the mid 1990s in New York, churning out jokes for cash.

Steven Victor Tallaricco was born on March 26, 1948. This is perhaps the most tragic example of slavery to the Second Great Secret. Aerosmith's run on the airwaves was from 1970 to 1978: in many ways, Steven Tyler's music defined that decade, for better and worse. When the folks at American Idol (for those worldwide who didn't know, yes, we have one too, and we're just as sick of it as you are) rolled Steven Tyler out of cryogenic storage and defrosted him to serve as judge, apparently no one told him what decade he was in, or how old he is. This poor 64 year old AARP retiree is rattling around in the glam rock threads of a 25 year old in the 1970s, right down to the danglers and chains, the lank greasy hair, the platform heels, and the bell-bottoms made of Chrysler upholstery. It's just a constant reminder of just how old and out of touch he is, and how much he desperately wants to be that young man again.

Compare to William James Murray, born September 21, 1950.  Everyone knows Bill's Golden Years: beginning in 1976, at age 26, on Saturday Night Live, and a string of successful motion pictures through the 1980s, including Meatballs, Caddyshack, Stripes, Tootsie, Where The Buffalo Roam, and the Ghostbusters franchise. So it should surprise no one by now that Murray's "Festival of Plaid" suit at Cannes this year places him sartorially squarely in his late 20s, and in the early 1980s. But where Bill Murray differs from similarly-aged Steven Tyler is in the execution. Instead of a sad sort of historical costume, it evokes the past without being slave to it. This is not a bad suit at all. Does it show Murray as a 62 year old guy lost in the 1980s? Sure, but more as an homage: he is able to have fun with it. It follows the strictures of the Second Great Secret, but Murray makes it work for him. It's a good example of color and pattern matching, and as a breezy summer suit, it works as a whole without being ocularly jarring. In short, he uses elements of that era over which he ruled, and incorporates them in such a way that it becomes comfortable for him, while keeping the cut and style thoroughly classic. In other words, a proper method of the working-out of the Second Great Secret.


Click here to go to the next essay chronologically.

Click here to go back to Part Twelve of Dressing the Average Guy.