Chapter 68
This week, we're looking at influence. Specifically, what the young-and-impressionable set do when they see adults acting and dressing a certain way: they copy them as best they can.

Children learn through imitation. 'Tis always been so. If they were fortunate, they learned from their parents first, then from tutors, then professors, then professionals. If they were less fortunate, they learned from orphanage directors, then from Dickensian factory masters. All right, there were also shades of demarcation between those two extremes...but the point is, for most of human history, kids were the passive observers. The adults were going about their adult-y business, and the kids absorbed the proper way to go about things in an adult mode.

Then, media happened, and very wealthy men who should know better discovered that children were commodities that could be pandered to directly. Instead of children looking up to adults, the adults stooped to the level of children. And they kept stooping, lower and lower, each generation.

So, let's peek at the adult side of the equation, through the most childish of the "serious" awards events. (We're discounting venues like MTV and the Kids' Choice Awards, as these are deliberately aimed at a child's maturity level; there is thus nothing to be learnt from them.) No, we shall look at the Billboard Music Awards. Specifically, the Magnum- Jergens- Bioré- Sunkist- ABC- John Frieda- Chevrolet- Sundrop- Sony- MGM Grand- Billboard Music Awards. Unlike most of the Hollywoody events that reward talent, ability, originality, or excellence, the BMA gives out trophies to who sold the most crap. That's all -- trophies to whomever had the broadest, most general appeal to the largest number of average meatbots with access to iTunes.

Their music, and its effect on young ears and young minds, is another issue entirely. Fortunately, this is Dress Like A Grownup! and the focus here is on the threads, not the sounds, that these cats are throwing down out there.

Because of events like the Billboard awards, we have a unique opportunity to see who the children of today are looking to for their stylistic adjuvants. This is not a formal awards show; there is nary a tuxedo to be seen. This is an event for the uber hip and mega trendy. And while there are some truly mind-numbing aberrations, there is also some hope for the future. 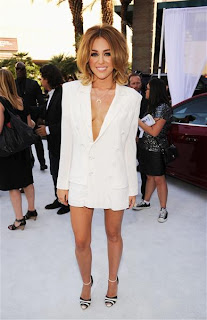 Because this is Dress Like A Grownup!, we're not going to focus on the girls here, as most are doing at Miley Cyrus' typical post-Disnoid idiocy; but look instead at some of the going trends among the men present. As always, where necessary, I shall adjust the contrast of the images to highlight the details.

We'll start off with the worst of the bunch. Not surprisingly, a child tops the list. Multimillionaire Justin Bieber is dressed --albeit poorly-- for the first day of a lower-middle class urban high school. His handler probably dressed him thusly. Note the chunky trainers and long sleeves pulled to the elbow. Notice, too, a textbook example of the striking disproportion of modern fashion: his torso appears quite literally twice as long as his stumpy little legs.

A bit older that the Beeb, but notice Chris Brown's trainers, elbowed sleeves, and tee shirt. It's a more mature suit, but the kiddy fashion trend remains. Worn properly, the suit might even (barely) pass for a tux, but this is the extent that dressing-down takes. And it looks, I'm sorry to say, patently ridiculous.

Josiah Bell, more of the same: Miami Vice up top, Rosie the Riveter down below. The frustrating thing is, worn properly, this wouldn't be a bad outfit at all. Sleeves down, real shoes, and a day cravat under the tee, and he'd be quite stylish.

Robin Thicke, now we know you're just glomming on -- you look far too ill at ease to believe you actually look good. In fact, you look disturbingly like your dad thirty years ago.

As bad as the above examples are, it looks outright elegant compared to this. I don't know what, if anything, Kuba Ka was thinking here.

Wiz Khalifa proves that a (potentially) nice waistcoat does not always save the ensemble from absolutely everything else.

Michael Lockwood models the latest in burlesque clown-suittery. Just, what? Ever see a five-year-old girl go through her grandparents' closet? This is actually worse than that.

Now that we've hit rock bottom, we'll draw some attention to some guys that understood what was going on. Not brilliant execution in some cases, but at least some effort was given.

Gavin Degraw, at least, is trying. A nice suit with a belt, even an acceptable tie --remember this is not a formal event-- but the red hat and black shirt just end up looking goofy. Notice the trendy trousers that are so extremely narrow that they are forced to gather in folds above the shoes, unable to break properly over them.

John Legend, oh! so close! The jogging pants and sneaks are just stupid, and unutterably out of place with the jacket. Sleeve length notwithstanding, I kinda dig the black band collar shirt with the futuristic grey fly-front minijacket. Because, like, buttonholes are so passé.

Luke Bryan's summery casual ensemble almost works. White jackets are quite acceptable in this venue. Even the bit loafers can't atone for the open shirt, unfortunately. Even without a tie, a simple day cravat would have nailed the look. 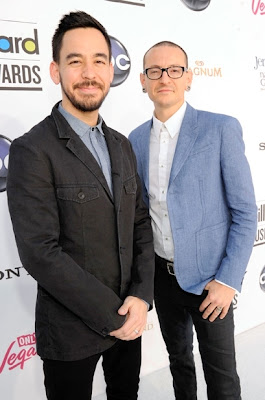 Linkin Park did a fairly good job channeling the Carter era with their denim leisure-suity ensembles. This is a good example of striking the proper balance for this casual event. Any less than this would have looked too casual because of the nature of the material involved; any addition to it would end up looking affected.

Miguel shows the hazards of mismatching. All the parts are there, but they aren't coalescing into a unified whole. The matching trousers would have worked much better -- even with the untucked shirt. And I don't say that often.

Compare with Eric Benet. This is actually a really nice suit in all regards, and an expert study in color and pattern matching. If I were to nitpick, it's that the double breasted waistcoat, with the low crossover, is better suited to a bow tie. Perhaps overall the suit is a little too bright for this function: it would be better "suited" to an outdoor event, or a resort.

Co-host of the event Ty Burrell got it right, a good casual mix that hits the right buttons. All wrong for formal wear, of course, but for this, not bad at all. The batwing tie is especially nice, and a great reminder that bow ties do not always equal formality. 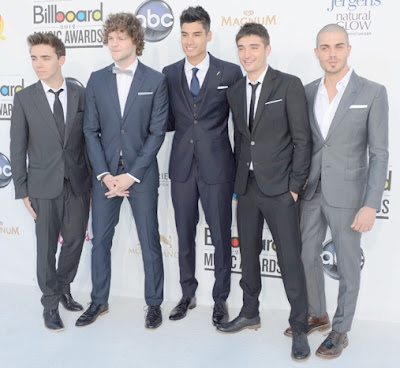 The Wanted tried to pull off a unified mid-century retro vibe within the current minisuit fashion, but it turned out looking a little over-staged. You can see their handler in your mind's eye, a la The Wonders: "You're the front man; you wear the vest. You, no tie; you're the bad boy. You, just loosen your tie, 'cuz you don't care. You, you're the goofy one; you wear the bow tie, and everyone wear a square except....you." Still, high marks for the attempt at a choreographed put-together classic look. 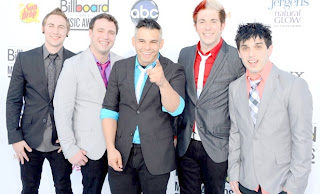 Especially compared with, say, Patent Pending. Ush. At least they are wearing ties, and that puts them all head and shoulders above the Beeb.

We'll end this installment on the best of the evening:

Jason Derulo has it down cold, and wins my award for best dressed at an event where no one is really dressed at all. This is a perfect outfit for a casual awards event. It's not formal wear, although it is quite dressy and elegant: it shows just the right amount of interest and fun without calling undue attention to itself. Proper shoes, trousers that fit, and a diamond patterned tone-on-tone shawl collar smoking jacket, over a white band-collar shirt, buttoned up with no tie. The fit is impeccable -- this is how it is done. Children, pay attention.

There were many good examples of smart dress in attendance for children to emulate...but for each tastefully casual example, there were legions of musical yahoos who were so busy trying to out-unique each other, they ended up looking identical in their awfulness. These guys are in a unique position: they are not only stars, they are ad hoc fashion icons for the millions of young'uns that listen to their music and follow their concerts. Too few -- far too few -- take that responsibility seriously.

Click here to go to the next essy chronologically.