Chapter 65
Earlier this week, the White House Correspondents Association held their annual dinner in Washington, DC. You might be excused for thinking it's just another Hollywoody awards show: all the visual cues were there -- the lights, the reporters, the glitz, the starlets mugging for the cameras, the emcee yukking it up, even a red carpet. The only clue that this wasn't the same-old, same-old: the presence of political high-ups glad-handing everyone in sight, a lot of nobodys, and, oh, yeah, the President of the United States.

It's all a disturbing melange of press, politics, and popular media, of excoriating insults and laughter, that leaves one feeling vaguely icky and in need of a shower. There are lines being crossed here, that shouldn't be; and worse than crossed -- they're mixed, mingled, blurred, knotted, and interbred. We're to believe it's just for one night, and then it's back to business as usual. Which somehow doesn't alleviate the ick.

But you know what we're here for, and it ain't politics. Let's look at what the men wore to this event, and why, and what we can learn from it. First, though, let's get a little history out of the way, and see what the White House Correspondents' Assocation is all about.

'Way back in 1914, Woodrow Wilson started the regularly scheduled press conferences that we all know and love today. A rumor got out that a Congressional committee would choose the reporters. Eleven reporters panicked, jumped into action, and formed the WHCA to "promote the interests" of the White House reporters. The rumor turned out to be just that: a completely unfounded rumor -- the Association found itself with nothing to do and no one to fight against.

How embarassing! Reporters who get a story wrong by assuming an unsubstantiated rumor is fact? And then act on it in a panic? It's a good thing that never happens any more!

Anyway, in 1920 they decided to make themselves useful by holding an annual dinner, an entertainment blowout that was an opportunity to schmooze and kick back a little. It was a traditional men-only dinner party, with singers, films, skits, and most likely cigars and ribald humor that wasn't for the delicate sensibilities of women. Because that's how much American men respected women back then.

In 1962, John F. Kennedy was pressured into forcing the Association to accept women, by threatening to not attend unless the ban was dropped. Presidential attendance isn't required -- the dinner's for the reporters, after all -- but usually the President chooses to attend. "Don't bite the hand that feeds you" works both ways, you know. 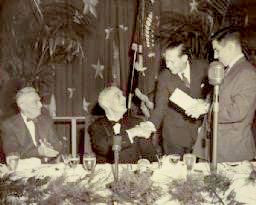 Here's FDR at a WHCA dinner. Notice the President is in a proper dinner jacket, but the others in the photo are in regular suits and long ties -- this was not considered a formal affair then. 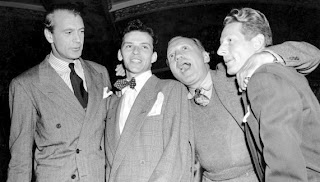 A photo of hosts Frank Sinatra and Danny Kaye, with guests Gary Cooper and Jack Benny. Although dressed nicely enough in popular drape suits of the era, it is apparent that this was a casual dinner, not even requiring the most basic of dinner jackets. 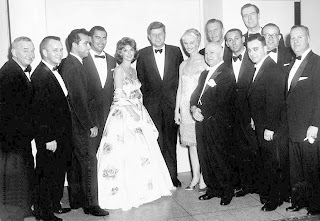 By JFK's time, the event had formalized a great deal. Note the presence of both dinner suits and dress suits in this photo. 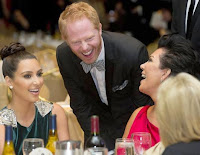 These days, the Association's dinner is self-justified by raising money for the scholarships and journalism awards that it presents to itself. (Don't bother looking for it -- that part's not televised.) The Association members are permitted tickets that they may disburse at their whim. And their whims run to captains of industry, CEOs of businesses, politicians, and of course, celebrities that are backed by the respective reporter's parent companies. It's quite a coup to get invited, of course, for the ying/yang of fame and power exert a mighty pull on those that covet them.

You might think that this should by all rights be a full-formal event, requiring dress suits of white tie and tails, on par with a State dinner. After all, this is dinner with the most powerful man on the planet. You'd be wrong, though, for two reasons. First, this is not AT the White House, despite what the name would lead one to believe, and the President is merely a guest of the Association, not the host of the event. Second, the machinery of politics is in full-grind all through the night.

Politicians are painfully, acutely aware of class-warfare politics and the perceived need to show themselves as completely average. In a deep dark recession, with a true unemployment rate somewhere north of 30% of eligible Americans, millionaire politicians who show themselves to be too successful, too wealthy, or having too much fun, is a Bad Thing -- whether the politics are in Washington or Hollywood, it's all about pretending to be Middle-Class America. 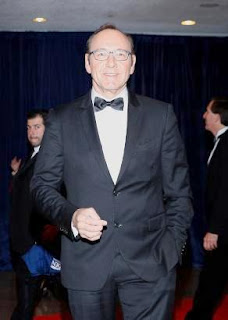 How do you present that image while wearing formalwear, a mode of dress that is elitist and exlusionistic by nature? Either use a plain black jacket, like Kevin Spacey, 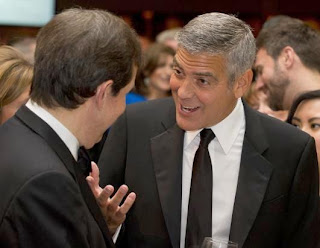 or apparently rent the cheapest, most ill-fitting tux you can find, preferably with notch lapels or plain revers, like The Clooney, chatting here with Chris Wallace. 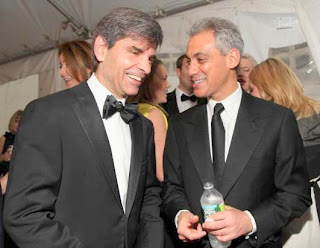 If the jacket is too nice, say, one with peak lapels, kill it with a long tie, like Chitown mayor Rahm Emanuel did. 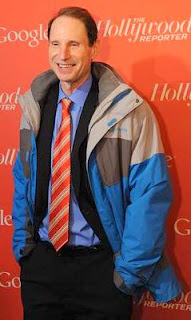 I won't bore you with countless details, because the story was the same again and again and again. I won't even touch on the pre-event red carpet walk the night before, hosted by Google. Perhaps because the red-carpet strut was the day before the main event, the men thought there was no need to dress, although all the women seemed to get the memo. Or maybe, like Oregon senator Ron Wyden, they just didn't understand what "wear a jacket" meant. 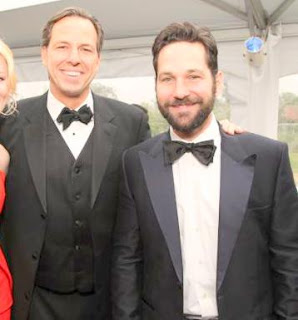 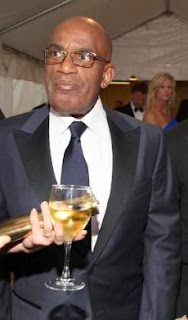 Al Roker came close to nice, with a finely tailored dark blue tux. Then he killed it with a long tie. 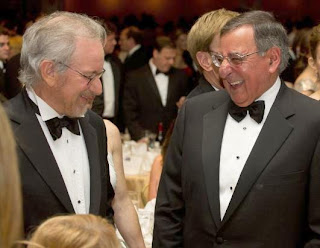 Steven Spielberg and Secretary of Defence Leon Panetta, try as they might, just can't pull off the common-guy vibe, despite nearly identical plain tuxedos. Perhaps incorrectly wearing his (otherwise elegant) wing collar over his tie, is Spielberg's attempt at der Durchschnittsmensch. 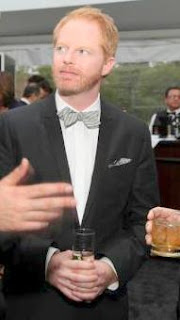 Matthew Morrison stayed in character as well, with his same awkward minisuitted style. 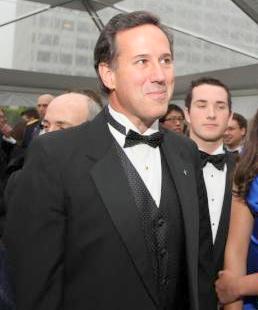 Rick Santorum, having abandoned the 2012 big prize, went to the Prom section of Sears. The shapeless coat, the pre-tied bow, the artless waistcoat, the matching patterned vest-and-tie fabric...it's sad to see a man just phone it in like this. 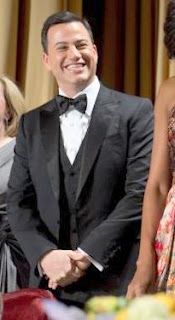 The host usually sets the tone and degree of formality for these events. While Kimmel's dinner suit is slightly better executed than most that evening, it's by no means a top-drawer model. 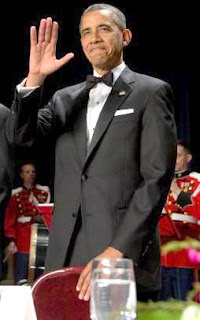 Nor was the President's itself. Average. Just middle-America Prom-average.

A quick observation: as compared to previous awards events, even though the cut and finish of the tuxedos in general were definitely sub-par, the presence of a greater number of waistcoats and open jackets presented a refreshing change. I wonder if Jean Dujardin's very proper outfit at the Oscars had any bearing on that?

What do you do when you want an event to be formal but not "too" formal? Horrid, sad excuses for tuxedos are not the answer. Either abandon tuxedos and go back to the casual dinner format, or be proper and unapologetic in your dinner wear. Or, (and this is my preference,) go whole hog already and make it a white-tie event. Everyone in attendance is able to afford bespoke tails, so they should stop pretending they aren't and just pull all the stops out. It's the closest most of them will ever get to the office of the President, so they should just celebrate that. Who knows, perhaps dressing like mature adults will lead to acting like mature adults.

This whole annual train-wreck is so self-consciously structured it breaks the bounds of reality. The relentless posturing, posing, and faux-accessibility is absolutely unnerving. The dinner has devolved from an evening of diverse entertainments to little more than a roast: stand-up routines consisting of endless ad hominem personal attacks; which is the cheapest and laziest form of humor. Softballs are thrown to political friends while incendiary insults and abuse are hurled at political adversaries. And everyone smiles and takes it. Actors can be as phony as they want: that's their job. But when I see businessmen, politicians, and the President  -- those men who have the power to shape the very world in which we live, for whom honesty and forthrightness should be paramount -- play-acting for the masses, I get the heebie-jeebies.