A Pocketful of Balance

Chapter 69
This week, we shall take another peek at the concept of balance. Not "balance" in the tailoring sense of the physical relationship of the front and back halves of a piece of clothing -- we've discussed that issue thoroughly and recently enough on The Island. No, this is balance in its more basic and holistic sartorial form, as previously discussed in The Dressing the Average Guy series.

In addition to the basic color, cut, and pattern of a suit, balance can be created or skewed by the addition of accessories. The form of the shirt collar, the type of tie, the knot of the tie, and the presence or absence of "furniture" like collar stays, collar bars, tie tacks, cuff links, or lapel pins can add variables to set and fine-tune the sartorial balance of a suit. 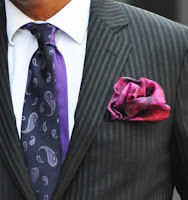 Another method, and a very useful and convenient one, is stuffing a pocket square in the jacket's breast pocket. The squares themselves, usually hand-rolled silk, serve no useful purpose other than sheer decoration. The methods of employing them are virtually unlimited. The simplest is to lay it out flat, pinch it up from the center, flute it with one hand, fold it in half with the other, and stuff it either points-down or points-up. That's the most informal method, and the best way to offset a very precise fit with a casualized balance. There are a wide range of standard "folds" that give specific effects, and each style can be used to adjust a jacket's sartorial balance to give a greater or lesser casual influence to the outfit as a whole, depending on the fold's symmetry, height above the pocket line, and whether the "show" of the square involves the edge or the field.

Pocket squares have one thing in common, however, and it's an important point to make -- they only adjust the balance of a jacket toward the casual. A nice silk square can make an outfit dressier, more snappy, and more dandy, but it cannot add formality: silk's casual nature can only skew the sartorial balance of an outfit in a casual direction.

This is a problem in the twenty-first century: for most outfits start out with a markedly casual skew to begin with. Even the most "dressy" suit is still much less than actually formal. What is needed is a pocket square that still skews the balance in favor of dressiness, but actually ramps up the level of formality as well.

If you're familiar with Mr Thompson's Ties & Squares, you know the answer already.

Yes, I know the rules I set for myself: this blog is largely independent from the TT&S empire, and I'm not gonna use this as a grandstand to hawk my wares. But, when discussing pocket squares, I have to make an exception where Razor Squares are concerned, because, well, I'm the only person producing them. If you've read through the TT&S website (and if you haven't -- why not?!) you know the capsulized backstory and how they're made, so this is the Cliff's Notes version: Hand dyed cotton, starched till it's balsa-wood stiff, and folded in knife-edge sharp origami designs. 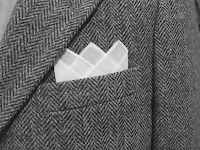 The purpose of a Razor Square is to take the pocket square concept, and use it to skew a sartorial balance toward formal as well as dressy. The inflexibility of the starched cotton and the precision of the square itself functions the same as a severely-tailored suit; to skew the sartorial balance in the formal direction. Its purpose is to take the very casual, nearly disheveled tailoring of modern off-the-rack jackets, as well as very worn secondhand items, and give the outfit a much-needed little boost toward the proper end of the sartorial spectrum. Used with a dress or dinner suit, it still skews casual, but not nearly as much as a silk square does.

The Razor Squares' designs capture some of the diversity of silk square designs within their hard-edged aesthetic. Some are traditional folds, some are complex and pleated, and a few are completely unique. They are easy to use, permanently folded, and pop right in the pocket with a minimum of fuss. And by an amazing coincidence (no, not really,) I've just introduced the ninth official Razor Square design, and the first new design since 2008. 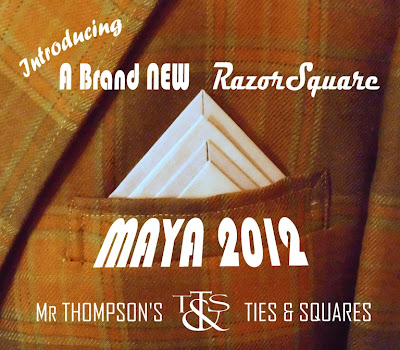 All of the Razor Squares have a sort of twisted logic behind their forms, and the Maya2012 is no exception. I bet you're wondering what the motivation for this one is...well, even if you don't, I'm gonna tell you anyway. You're welcome. 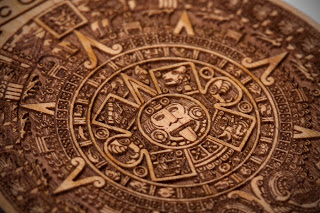 By now, most people have heard the "End of the Mayan Calendar" tales. The going story is that the Mayan calendar is very long and very unique, in that it has an end point at December 21, 2012, at which time the world will end. Yeah...no. A little bit of digging and research uncovered a fascinating tale. The Mayan ceremonial calendar, unlike our own, didn't stop at one year. They had the Kin, Winal, and Tun for days, months, and years. They had twenty days in a month and eighteen months in a year. (Their ceremonial year had 360 days. They also had an everyday calendar, to cover the remaining 5¼ days.) But their calendar didn't stop at a year -- they also had the K'atun: twenty Tuns, and the B'aktun: twenty K'atuns. The Long Count was thirteen B'aktuns, and the end of their "year."

If you're like me, and you process numbers better in graph form, here's the breakdown:

We know that the Mayans established the Long Count on Feb 28, 747 BC. They then back-dated the original count of years to 8347 BC, with the "first creation." When the 13th B'aktun was completed in Aug. 11, 3114 BC, the "era of the gods" came to a close and the new count started with the "second creation." That era ends on Dec. 21, 2012 AD, with the last day of the 13th B'aktun. The important thing to see is that the calender then doesn't "end," it just rolls over to the first day of the next Count, like we do on Dec. 31st of every year.

It's all about an astronomical feature called Precession. From our point of view, the sun moves around the earth once a day, and the starfield revolves around the earth once a year. Ideally, on any given day, say, January 1st, the sun should be in the same place in the sky from year to year. But seems to drift slightly each year. In fact, because the earth wobbles very slowly like a top as it revolves, the tropical year is 20 minutes shorter than the sidereal year, so it takes 25,694.8 years (more or less) for the sun to appear to drift completely around to where it started from.

The man credited with "discovering" the periodicity of the cycle of the "Great Year" was the Greek astronomer Hipparchus in the 2nd century BC. But the Mayans not only were aware of it, likely several millennia previously, they were able to calibrate it by the 7th century BC. And they gave it a start point. Because the solar system's orbit is oblique to the galactic plane, the sun crosses the swath of the Milky Way once a year -- but the sun's position aligns with the core of the galaxy on the winter solstice only once a "great year."

Why, 2012, more or less: (the sun is half a degree wide, and the Milky Way is quite thick, so there's about a 20-year margin for error.) Still, for a people who lived 2,759 years ago, that's not bad reckoning. So 13 B'aktuns is one quarter of a "great year," and the Mayan "first creation" in 8347 BC aligned the sun with the Milky Way on the summer solstice. That galactic-solar alignment, for the Mayans, was apparently a signpost writ large in the heavens on which they based their very long-range day-planner.

So it seems at least important enough that it warrants a new Razor Square to commemorate it! The four nested triangles are meant to represent alignment arrows, repeating endlessly every 13 B'aktuns, marking the matching alignment four times in the solar year to the Great Year. It's a very poetic, and elegant, and quite farsighted way to look at the passage of time.