Chapter 23
Welcome back! This week, as happens every once in a while, we're going to take a little detour off the beaten trail of what's proper dress, and explore a bit of the incidentals. Dressing like a grownup, in addition to the clothes you wear, involves still another level of adornment. We call these accessories, and we shall look at these today. As the name implies, these are all those extra bits that are added to your attire, that aren't strictly necessary, but add a bit of personalization. Most of these will have individual chapters devoted to them in future; for now, however, an overview will suffice.

Let us start by defining what isn't an accessory. For the sake of our discussion, we shall start with shoes, trousers, shirt, and jacket: for you can be fully dressed wearing just these four things. (For the sake of perspicuity I will assume the use of undergarments in lieu of "going commando.")

The first category of accessories are those which are an integral part of your wardrobe; that is, those items which, although not obligatory, are fundamental to being fully dressed. They are those components that you have the greatest amount of latitude in, with respect to design and appearance.

Socks are an example: the patterns, colors, fabrics, and styles available are nearly infinite, and this small bit of individuality flashing below your cuff can add a great deal of personal interest to your outfit.

Similarly, a belt, suspenders, or braces, although little-seen under a jacket, is a palette for your sartorial creativity -- but when worn without a jacket, care must be exercised that these items do not overpower the outfit itself. Here also can be mentioned cufflinks, as well as the occasional shirtstuds.

A waistcoat is technically an integral accessory -- it has the capability of adding a great deal of individualism to an outfit. Traditionally, the waistcoat was given a considerable amount of latitude in regards to its style. Even when worn with otherwise somber suits, a waistcoat's button stance, collar shape, and pattern communicates a great deal of the wearer's personality.

Neckwear is the most-used and, it might be argued, the most important integral accessory of all: whether that be a scarf, ascot, cravat, day-cravat, bow, or long tie. It, as an apparatus autarchic, can convey not just a degree of formality, but your mood and emotional state as well -- all by the choice of neckwear, the manner in which it is worn, its color and pattern, and even the knot used to tie it. 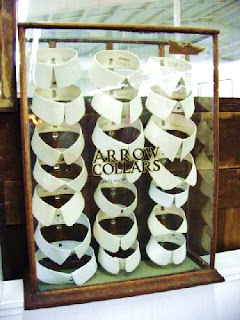 In previous decades, it could be argued that a detachable collar was an accessory, as a selection from a wide variety of collars could give your shirt as much character as the tie it framed. Detachable collars are used so rarely today, and the available motifs are so few, that they are considered part of the shirt currently, rather than an accessory thereto.

Hats are an integral accessory, due to their highly personalized nature. Shoes, although also a highly personalized item, are not accessories: While going hatless is not sartorially incorrect, it is not an absolute requirement -- a statement which cannot be said about wearing shoes!

The second category of accessories are those which are adjutants to your wardrobe; those items which, if worn, are primarily decorative.

To this category belongs the pocket square and boutonnière -- two accessories which are particularly close to my heart -- and I am an enthusiastic supporter of their frequent use. As I am an artisan of these particular items, I shall not say much upon their use here, as I have written a great deal about them elsewhere: by clicking on the large banner ad to your left you may read all about them.

The tie tack, tie bar, stick pin, and tie chain all serve a similar function: to keep a long tie or cravat orderly and in place against the shirt.

A collar bar, attached to the points of your collar and worn with a long tie, keeps the knot in place and pushes it forward; a popular look in the 1930s that is enjoying a resurgence.

A lapel pin is purely decorative, and shows the wearer's affiliation or support of the organization associated with the pin's device. One might think that arms displayed on a blazer or reefer jacket, (boat club, country club, etc.,) as is sometimes seen, would fall into this category -- but as the logo is an integral part of the pocket of the jacket, it isn't an accessory, as it is not removable.

Kid gloves, umbrellas, spats, and walking sticks, although often used as accessories in bygone years, have largely passed into the realm of history. Gloves and sticks still have their place as evening-wear accessories. The full-size walking umbrella, despite its elegance and utility, is unfortunately seen but rarely today.

The final category of accessories is the largest and most diverse, those which are convenience accessories; those gadgets, mechanisms, and fixtures that are carried for the sake of convenience, most often kept out of sight in a pocket until needed.

In decades gone by, there were tremendous amounts of accessories that may have been used. Many of them were finely-finished items with utilitarian purposes which wouldn't seem out of place today; such as coin purses, money clips, calling-card cases, pen knives, notepads, firearms, fountain pens, and signet rings. 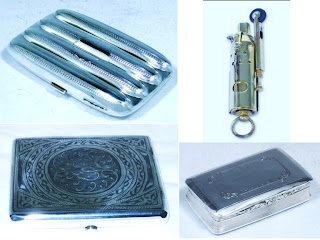 Not surprisingly, many accessories were tobacco-related. Above are shown a cigar case, lighter, cigarette case, and snuffbox. The lighter is a WWI-era "trench lighter" which worked well in adverse conditions, and was a popular item to attach to a double-Albert watch chain. Leisure-related items abounded; from pipe tools to flasks, to playing-card cases with compartments for dice.

An alternative to matchboxes, or naphtha lighters like the Zippo and trench models, was the old-fashioned tinderbox. Carried even when more modern alternatives were available, it gave the user an air of rugged outdoorsmanship and independence. Not surprisingly, it still does. 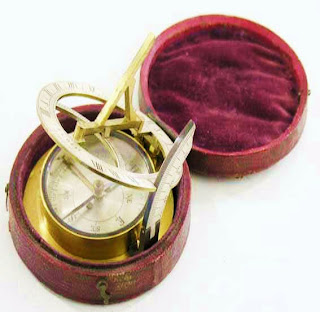 Pocket watches of all levels of complexity were nearly universally carried, either on a fob or a chain, until WWII elevated the popularity of the wristwatch. Lesser-known items were pocket sundials like this one. In an era when knowing the time to the minute was not as important as it is now, and access to a watchmaker was a difficult and expensive proposition, a good sundial would serve just as well. 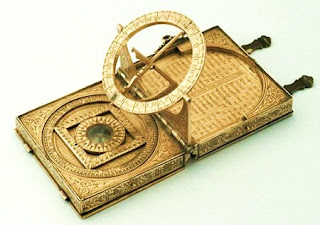 Another model, in a square format. A well-made sundial was a precision device that could be amazingly accurate, unless it was overcast. Or night. 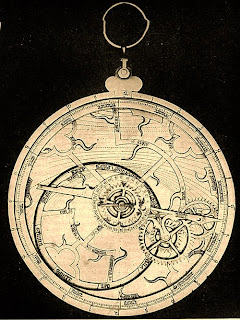 The benefit of carrying an analog computer in your pocket like an astrolabe, was the ability to tell time at night. It registered the date, the time, and the position of the stars; and by knowing two factors, you could determine the third -- with a surprising amount of precision.

Some of these items were superseded by cheaper mass-produced ones. The ornate, silver-plated works of art gave way to utilitarian cigarette packs, plastic butane lighters and Bic ball point pens -- merely disposable junk, rather than stylish accessories. Other items fell into obsolescence and disuse: taking snuff and carrying cards ran its course, wristwatches replaced the pocketwatch and its fob or waistcoat chain, hip-pocket wallets replaced money clips, and plastic cards replaced the need to carry cash and checks altogether.

Today, one universal convenience accessory has replaced most of the others: the cellphone -- a notebook and pocketwatch all in one, with "apps" for all manner of diverting, (and sometimes marginally useful,) functions. In fact, cellphone-wallet-and-keys has become the de facto accessorial standard for most men today. This doesn't mean we've reached the end of the accessorial line, however; even if choosing an accessory means it doubles one of your cellphone's functions.

Before we launch into what may make a proper accessorial combination for life in the twenty-first century, remember the less-is-more rule of formality: that is, the more formal something is, the plainer and simpler it is. Accessorizing is a game of choosing well those few necessary items you will need during your day, while leaving behind that which you will not need. And on that note, I shall leave you to mull over just what that might mean until next week. See you then!

Click here to go back to the beginning.
Posted by Mr Thompson at 2:56 PM