The TT&S Razor Square Man of the Year

Chapter 98
As the end of the year and Yuletide celebrations draw ever closer, (and the Mayan Apocalypse has come and gone,) it's time for Mr Thompson's Ties & Squares to announce the yearly recipient of its 2nd Annual

The man who wins this lofty prize must meet three standards -- 1) he must have been in the public eye for the previous year, 2) he must be a consistent wearer of pocket squares, and 3) he must be a benchmark of good taste and judgement that men would do well to emulate.

The TT&S Judges have selected two men as our finalists, each of whom, co-incidentally, inhabit opposite ends of the fashion scale. So without further ado, we shall begin with the runner-up: 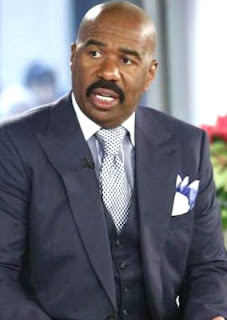 Steve Harvey (born January 17, 1957) was the son of a coal miner, born in Welch, West Virginia. (The tiny seat of McDowell County, five miles from Coalwood -- familiar names to anyone who has seen the movie October Sky!) He graduated from Glenville High School in Cleveland, Ohio in 1974, and was an Omega Psi Phi at Kent State and WVU. He has been a boxer, mailman, and insurance salesman, but his worldwide fame has been as a comedian. 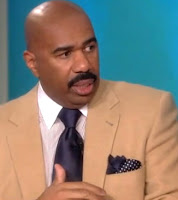 A versatile actor with a natural stage presence, he has appeared on the big and small screens, currently hosting the Family Feud game show, and his self-named daytime talk show and morning radio programs. He is also a best-selling author, and lives in Chicago with his wife and four of his children. A philanthropist, Steve and his wife also operate the Steve and Marjorie Harvey Foundation. 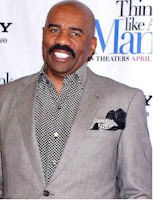 Steve is well-known for being a snappy dresser, and an enduring element of his wardrobe are his marvelous variety of pocket squares. Steve is a tall, broad man, standing six-foot-two, and his Balthus-knotted ties, spread collars, broad lapels, and florid squares fit both his size and his personality. His squares are not for the faint of heart: often dual-sided or edged in a contrasting color, they are fashion-forward explosions of exuberance bursting forth from his pocket in a loose, silky pouf. Do not be fooled into thinking his squares are carelessly stuffed -- rest assured these casual artworks are carefully arranged to give exactly the right aesthetic impression.

But Steve has been edged out this year, by a man who nearly made the grade last year -- his squares are a study in exactitude and restraint, less florid than Steve's, but no less remarkable for that. Gentlemen, I present this year's winner: 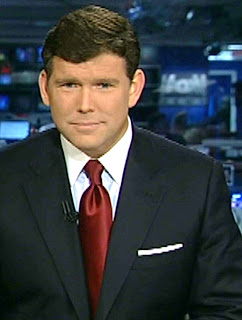 Bret Baier was born August 4, 1970 in Rumson, New Jersey, and moved to Atlanta, Georgia when he was 10. He attended Marist High School, a small Catholic school in Atlanta, class of '88, and was a Sigma Chi at DePauw University in Greencastle, Indiana, where he double-majored in Political Science and English and graduated in 1992. His first job out of college was at a television station in Beaufort, South Carolina, until 1996 and then in Raleigh, North Carolina until 1998, when he was hired as Fox News' Atlanta bureau chief. After covering the attack on the Pentagon on 9/11, he was made Fox's Pentagon correspondent.
He met his wife Amy on a blind date in Washington, D.C., at a Rolling Stones Concert. They married in October 2004 and now have two sons. 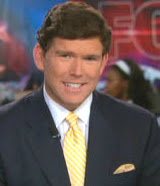 He became the White House correspondent in 2007, and then began substituting for Brit Hume as anchor of Special Report. He took Hume's place as full-time anchor in 2009, and has hosted Special Report since then. Today, most people have seen (or at least heard of) Bret Baier. No wonder; his "tough-but-fair" reputation is well-deserved, and Special Report has been ranked the number one political news program on cable television. 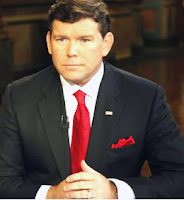 It was this election year that put Baier's pocket squares in front of the world. He anchored Fox's coverage of the 2012 Republican primaries, and moderated five debates among the candidates, including the highest-rated cable news debate in Orlando, Florida. If anyone was paying attention to the election at all, Bret was most likely a part of it.

Bret's tight, neat reporting style, is echoed perfectly in his tight, neat pocket squares. What otherwise would be just another dreary "Reporter Black" suit is brought to life with just a hint of color and design. He is rarely seen without one, and it has not just become his own signature style, but he has influenced his co-respondents to start wearing squares as well. Each square is a small, subtle work of art. 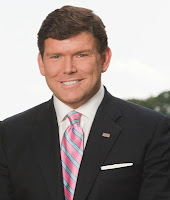 His television folds are perfect vintage, a razor-straight three-eighths inch strip of bright white. His poufs and points are refined, sophisticated and perfectly proportioned. And his color-matching is exquisite, never exactly matching the tie, but with just enough variation in pattern or hue to give the correct visual interest. Often, the news-crawl at the bottom of the screen cuts him off at the chest, so the square isn't always readily apparent, leading to some interesting "spot-the-square" drinking games. In short, his aesthetic is perfectly in keeping with that of the Razor Square style, and this year, that gives him the edge that puts him over the top.


So congratulations, Bret Baier, you are the
Mr Thompson's Ties & Squares
2012 Razor Square Man of the Year!

Click here to go back to the 2011 Razor Square Man of the Year awards.