The TT&S Bow Tie Man of the Year

Chapter 97
Another year is nearly behind us, and that means it's time for our own annual awards shows! This week, Mr Thompson's Ties & Squares chooses one man who deserves the accolade of the 2nd Annual
2012 Bow Tie Man of the Year!

The criteria for our yearly accolade is threefold:
I. Our Man must be a man in the public eye, who has the attention and influence of a great number of people.
II. He must exemplify the art of the bow tie to a high degree, and
III. He must, through his example, encourage other men to don bow ties as well.

The selection process has been narrowed down this year to but two men, who co-incidentally, work in very similar fields.

The Runner-up chosen by TT&S this year, is an American chef, editor, publisher, and radio and television personality. His use of bow ties is very nearly a trademark, and has been an example of quietly wearing a bow tie the right way, with no fuss or fanfare, for over a decade.

Christopher Kimball (born June 5, 1951) was raised in Westchester County, New York, and went to Columbia University with a degree in Primitive Art. He went to work with his stepbrother in a publishing company and started taking cooking courses, then got his family to pony up the cash and started Cook’s Magazine in 1980, when he was 29 years old. 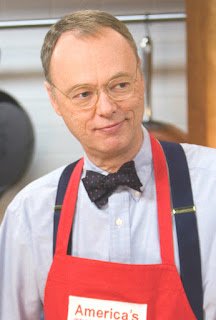 Now anyone who has channel-surfed on a Saturday afternoon has probably run across Chris Kimball on PBS, on America's Test Kitchen. If you've stayed your remote control long enough to sit through an entire episode of this dry-sounding show, you're probably hooked already. It's "cooking deconstructed," pared down to its delicious, infinitely repeatable, scientifically foolproof essentials, in a low-budget, minimalist, eminently practical format that is perfectly at home on PBS. This is not an accident: Kimball is the founder, editor, and publisher of Cook's Illustrated as well, which is a minimalist, eminently practical, just-the-facts magazine. Don't mistake its deliberately "downscale" format for a bargain-basement production, though -- America's Test Kitchen draws over two million viewers a week, which is about four times more than almost anything on MSNBC or CNN.

In addition to publishing and editing two magazines, and hosting two cooking shows, Kimball has authored five books, is a columnist for the New York Daily News, has been featured in everything from The New Yorker to the L.A. Times, and is a regular contributor on NPR and The Early Show. In fact, he's nearly everywhere, once you start to look for him...but much like his television programs, he's an unprepossessing fellow, more scientist than showman, and it's easy to miss him on the radar screen of cultural zeitgeist. 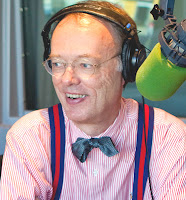 But for twelve years, he's been on our television screens, and he's changed very little: a Nor'easter haircut, a Don Knotts-ish expression, round wireframes. And under his red apron: an oxford shirt, sleeves rolled up to the elbow, suspenders, and a bow tie. You would think that attire that never, ever changes would become a uniform, or worse, a costume; as evidenced by fellow PBSers Justin Wilson's red string tie, Roy Underhill's braces, or Bob Ross's fuzzy, fuzzy afro. But Kimball demonstrates that one can wear a bow tie every day, for years on end, and never look out of place. He wears a variety of bows, in differing colors, patterns, and styles, and wears them all unironically and well; although his penchant for a small knot, broad leaved, medium width, lightly lined blue silk pindot clearly shows that he's been around bow ties long enough to know just what style best compliments his morphology -- and his red apron. His approach to bow ties is like his approach to everything else; precision, constancy, and efficiency of thought.

Which brings us to our winner this year. Also in the entertainment industry, also a foodie, but a relative newcomer to the onscreen bow tie. In many ways he is the counterpoint to Chris Kimball's rock-steady, week-in-week-out bows -- but the spark of life and excitement he brings to his neckwear outshines the relatively short time he has been seen in them. 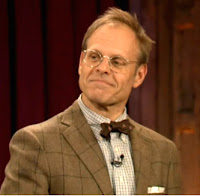 Alton Brown (born July 30, 1962) is also a television personality, chef, author, actor, and cinematographer. Born in Los Angeles, he graduated from the University of Georgia with a degree in drama. He began his career in cinematography and film production, and a decade later moved to Vermont to train at the New England Culinary Institute in Montpelier. He observed that most cooking shows were too dry and boring for his taste, and he wanted to do something about that. 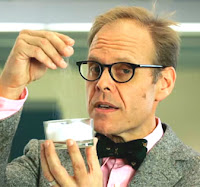 He is best known as the creator and host of Good Eats, and the host of Iron Chef America. He has also hosted several mini-series and specials on the Food Network, and is the author of ten books of cookery. Although just as science-and-chemistry oriented as Christopher Kimball, his Julia-Child-meets-Mister-Wizard approach, offbeat editing and sharp wit have made him something of the Accidental Rock Star of the food world, and Good Eats has achieved the same sort of cult status among foodies that Monty Python achieved among, well, the people that watch Monty Python. 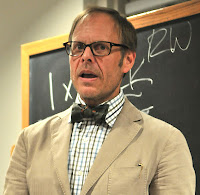 So what is it that Alton brings to the table? In a word, seasoning. (Sorry: food analogy.) His approach to bow ties is like his approach to everything else; energy, sprezzatura, and insouciance. He knows style, does Alton: and how to use that style. Alton is as notable a Man of Fashion as he is a Man of Culination. Any guy who wants to know how to not just wear a bow tie, but wear clothes and be Dressed Like A Grownup!, would do worse than to study Alton Brown. And I can't think of a higher accolade than that. 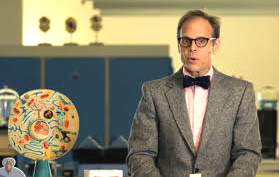 We'll leave with some recent quotes from Alton himself on the subject:

"I like bow ties because you don't get tangled up in them. I'm a man of action."

“The bow tie also has advantages in the cockpit as it won’t snag in harnesses or headset cables. [Brown is a pilot.] Also, bow ties make me feel just a little bit more like a time lord."

So for all these reasons and so much more, Alton Crawford Brown,
you are the Mr Thompson's Ties & Squares
2012 Bow Tie Man of the Year!

Click here to go back to the 2011 Bow Tie Man of the Year awards.