The TT&S Razor Square Man of the Year 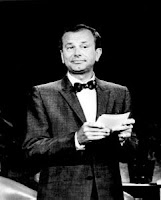 One of the most memorable moments in television happened on The Tonight Show in 1960. Jack Paar, infuriated by the NBC censors' decision to cut a joke, (and a tame and rather funny one at that,) abruptly and without any warning walked right off the set. He stayed off for nearly a month, as NBC scrambled for hosts to cover his absence. Rumors and supposition suffused the public as Parr dropped completely out of sight. Then, one night, out of nowhere, he strolled on set, paused for a moment, then said, "As I was saying, before I was interrupted..." to an uproarious response from the audience.

Yes, the TT&S difference engine is back online, and all is well in the Sartorial Empire. All my data and files are intact, so we'll jump right back in where we left off, with what was to be the start of a yearly tradition on Christmas week. So, "as I was saying," Dress Like A Grown-Up! in cooperation with Mr Thompson's Ties & Squares, is pleased to present the annual

The criterion for this fine and noble distinction is to be (1) a man who has the public's eye and attention, (2) who consistently wears pocket squares publicly, (3) who shows a fine or unique sensibility in their pocket square choices, and (4) through whose example other men may be encouraged to do the same.

After much deliberation, we have 2011's three finalists.

The Second Runner-up is known for his work on the AMC series Mad Men. That entire franchise is a showcase for all things Mid-Century Wonderful, from the smallest details of furniture and architecture to a very good study of the basics of men's Classic Style in clothing. It's not a perfect show: it can certainly be a parodial pastiche of the era at times, but it is a tutorial in the Right Way to dress, notable in the pocket squares of the characters. 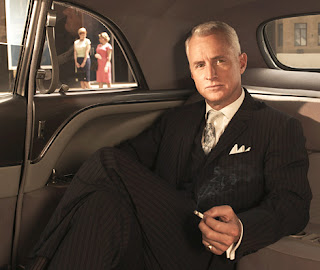 John Slattery, who plays Roger Sterling on the show, wears a variety of crisp starchy squares. Jon Hamm's Don Draper limits himself primarily to TV folds, but Sterling's squares are a bit showier, more elegant, and just as wearable today. Slattery didn't place higher through any fault of his own -- Mad Men itself, as a "time capsule" show, is the limiting factor here. As with any program set in the past, the fashions are by definition inaccessible and costume to modern eyes. Slattery's squares may catch the attention of the viewer, but may not encourage emulation in modern dress.

The First Runner-up, by contrast, is very much in the modern world. He is a man in front of the camera, but not an actor, whose sartorial choices are clearly his own. And he is a true connoisseur of the pocket square. 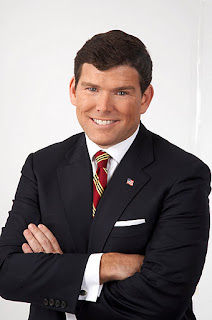 Bret Baier, Fox news reporter, former bureau chief, Pentagon and White House correspondent, and current anchor of Special Report on Fox News, is rarely seen on-camera without a pocket square. There has been much on-air good natured ribbing among the correspondents on the subject, and Baier's squares are an indispensable part of his wardrobe. He wears many differing styles, from the ubiquitous TV fold, to linen folds and silk poufs; all in perfect harmony with his tie, his suits, and even the overall tone of his broadcasts. He wears them naturally, and they don't call attention to themselves, but at the same time they complete the overall look of his suits with elegance and panache. The co-ordination of tie and square, a delicate balancing act of color and pattern, is accomplished so well by Baier that it should be required study for any man wanting to see how to do it right.

This year's winner edges out Baier by a whisker. A television entertainment personality, he is more universally known, but more importantly, he demonstrates a side of the pocket squares that is very seldom used, and that unique take on the art earns him this year's top position.

Dr. Phil McGraw, an experimental and clinical psychologist, was hired by The Oprah for her 1995 trial. She was so impressed, she invited him on her show. This led to a weekly spot, then vaulted him to the vaunted position of a satellite orbiting Oprah's gravity well, and his daily "Dr. Phil" show. Dr. McGraw's wardrobe is supplied by the Italian designer Mabro, his on-set costume coordinator plays a part in what he wears, and he has a salary befitting an Oprahite, so it stands to reason that he looks good on-air. 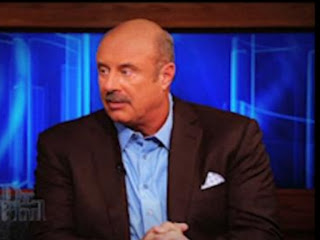 Dr. Phil doesn't always wear pocket squares with his suits, but does often enough; and it is always a Mabro silk pouf. He doesn't always wear a tie: depending on the tone of the show, he is sometimes attired in a suit coat over an open-collared polo-style golf shirt, or in a dress shirt sans tie. What's so notable about this that warrants the Big Prize to the good Doctor? His no-tie informality is nearly always balanced with a pocket square that coordinates with the shirt. The square thus takes the place of the tie in the formal hierarchy. Pocket square as replacement for tie is a subtle but revolutionary note that shifts the balance of what's dressed-up and what's not. Shifting that small splash of silk and color from around the neck to in the pocket probably won't become become the new twenty-first century formal -- however, it does point the way to what may be a vital step in forestalling the inevitable slip into universal slovenliness.

So congratulations, Dr Philip Calvin McGraw, PhD,
you are the Mr Thompson's Ties & Squares
2011 Razor Square Man of the Year!

Click here to go to the 2012 Razor Square Man of the Year award.