The TT&S Bow Tie Man of the Year

Chapter 42
This year marks the genesis of yet another tradition here at Dress Like A Grown-Up! Once a year, on the week of Thanksgiving, Mr Thompson's Ties & Squares chooses one man who deserves the accolade of the
2011 Bow Tie Man of the Year!

The criteria for this lofty prize is threefold. He must be a man in the public eye, who has the attention and influence of a great number of people -- he must exemplify the art of the bow tie to a high degree -- and he must, through his example, encourage other men to don bow ties as well.

The selection process has finally resulted in our three finalists.

The Second Runner-up made the TT&S Finals for his popularity among the younger demographics, and his character's propensity for fine dress. He was, in fact, one of the very few young male television characters this year who might have made a positive influence on his viewers' attire, had they decided to copy his style.

Ed Westwick lost out on the top spot, not solely because of the limited scope of the show's appeal across very specific demographic lines, but also because the Chuck Bass character on the WB network's Gossip Girl wears his ties in such a faux-hipster ironic fashion. It's not enough to wear the bow tie to win the big award, one must respect the bow tie as well. The unlikeable personality of the character doesn't help the bow tie cause, either. Villains may dress well, but they don't  lend themselves to emulation!

﻿
The First Runner-up this year, a young British actor, is certainly not an on-screen villain. Quite the opposite: in the sci-fi/fantasy genre, he's a time-travelling hero. He was very nearly the winner this year, on account of a single on-screen assertion:
"Bow ties are cool."

Matt Smith's Doctor on BBC's Doctor Who not only revitalized the franchise's appeal to a new, young generation of Americans, but brought bow ties again to the forefront of pop-culture. Smith falls short of the top prize, not because of any shortcomings of his own, or his fans' lack of fervency, but in the very nature of the Doctor himself. In all the Doctor's incarnations through the decades, he has essentially worn a costume. Identical outfits every week make very good visuals from a hero-storyteller point of view on the tele-cine, but it doesn't make for easy emulation. Matt Smith's Doctor may champion the bow tie, but will the lack of diversity in his 'superhero' attire inspire others to wear bow ties in their everyday lives? It may be argued that people emulate their heroes, but the point may be debatable when it comes to costume: did Tom Baker's Doctor inspire people to wear 18-foot long scarves? Does Batman inspire people to wear capes?

Which brings us to this year's winner. And he's a natural. He plays a strong key role in the most consistently highest-rated show on American television in its time slot. His character is complex and interesting, and has a wide-ranging fan base that transcends demographic lines. Most importantly, though, his on-screen persona is a consistent wearer of a wide variety of bow ties in a naturalistic and decidedly non-costumey way.
Of course, I refer to David McCallum, and his role of Donald "Duck" Mallard, the Medical Examiner on CBS's NCIS.
﻿﻿﻿﻿﻿
﻿﻿﻿﻿﻿

Mr. McCallum, a Glaswegian born to musician parents in 1933, has had a long and varied life in the arts. He attended University College School and the Royal Academy of Dramatic Art in London, got his acting start doing voices for BBC Radio in 1947, was involved in London amateur drama in 1950, and became Assistant Stage Manager of the Glyndebourne Opera Company in 1951. He began acting in British films in minor roles in the late 1950s.  By the mid-1960s he was seen on American screens, notably as Judas Iscariot in 1965's The Greatest Story Ever Told, and on the small screen in The Outer Limits and Perry Mason. A classically-trained musician, he recorded four albums in the mid-sixties as well -- instrumental arrangements of the day's pop hits.

His breakout character worldwide, though, was as The Man From U.N.C.L.E.'s Russian-born secret agent Illya Kuryakin. McCallum took the peripheral role and constructed a complex character around him, the result of which elevated him to co-star status and two Emmy nominations.

Although he was never at a loss for acting work in Britain and Australia, as well as his many voice-over and narratorial gigs, he never re-captured his pop-culture icon status in America until 2003, with NCIS's Dr. "Ducky" Mallard. McCallum became an expert in forensics himself to play the role of Mallard convincingly. He was very nearly made a technical advisor on the show. 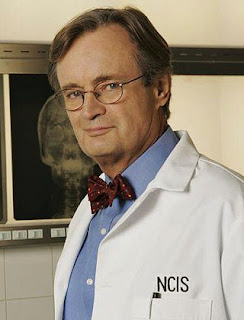 Most importantly for us, though, is Mccallum's use of bow ties. Rather than a kitchy costume, or as a snarkily ironic meme, McCallum wears his wardrobe as Mallard naturally and effortlessly. The bow tie is the perfect, logical accessory for his profession: when one is elbow-deep in viscera, one doesn't want a long tie trailing in the way. His ties are worn as a perfectly imitable example of timeless fashion, and at the same time tell a great deal about the character of the slightly eccentric, Morgan-driving classicist. The ties do not shout their presence, but they are ever-present. It's real, it's natural, and it's a testament to Mr. McCallum's virtuosity as a thespian to be able to create a lovable professional with such a well-tuned sense of fashion.

So congratulations, David Keith McCallum, Jr.,
you are the Mr Thompson's Ties & Squares