Chapter 30
Although you'd never know it, since it has been completely overshadowed by the Usual Sources and their "look-at-what-Pippa's-wearing-today" fetish and the standard hourly "look-at-sporty-Kate-wearing-her-dress-again" updates, people HAVE gotten married since Willie made Kate an honest woman earlier this year. Famous and royal people, some of them.


﻿Don't worry, I hadn't heard of them either. In short, Georg Friedrich Ferdinand is Prince of Prussia and head of the House of Hohenzollern, and 2nd great-grandson of none other than Kaiser Wilhelm II; who you will remember from your history classes was the last German Emperor from around the first World War. This makes Georg a similarly big muckety-muck over in Germany. Sophie is Princess of Isenburg, which is no small thing in itself.

You would be forgiven for missing their nuptials on August 27th. The world didn't stop for it, the media didn't cover it, and if it wasn't for one little item of interest for us, I wouldn't mention or care about it either.

As always happens, the gals' fashion publications have been going on...and on...and on about Sophie's dress; who designed it, how much it cost, ad nauseum. No one seems to have mentioned the one huge glaring blight on her outfit. You can see it here, on her right arm: 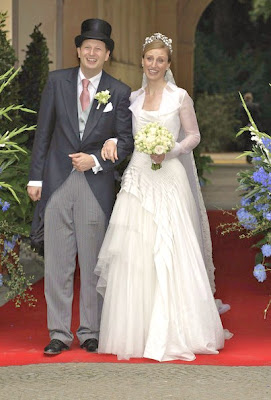 Why does no one mention or care what grooms wear? There can exist in the entirety of the universe no greater proof of the maxim that it doesn't matter if the bride is in the most elegant dress on the planet; if the groom doesn't know how to dress himself, it completely ruins the entire effect. Consider: that dress cost untold thousands of Deutchmarks --oh, sorry, Euuuros. It was specially constructed and painstakingly fitted...so that one person could wear it for half an hour. Does no one notice that its mere presence next to a goofy monkey in an outsized suit shatters all that work, and renders that same dress unutterably stupid looking?

Great Gatsby, people of Germany -- is there no one in the entire royal household who could have taken one look at Prince Georg, shaken him vigorously by the lapels, and shouted something along the lines of "Mein Gott in himmel, what are you thinking?! This is Germany! The homeland of beautifully tailored and exactingly precise menswear -- the land where the Rundschau system of tailoring took art, blended it with science, and developed a system of bespoke cutting that is still used and revered worldwide! You have the coffers of a nation at your disposal -- give 20 Euros to a tailor to hem your gorram pants!"

I don't even know where to start with this travesty of humanity. Let us cleanse our palate before continuing, with an example of how this outfit is supposed to be worn. 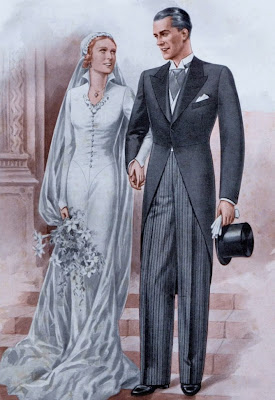 This is an illustration from the aforementioned Rundschau system, depicting, usefully enough, a German couple getting married. Notice the cut of his morning coat, (or ein Cut in German.) It fits his figure, and makes him look tall, lean, and athletic; wide of shoulder, broad of chest, and narrow of waist. Notice the effortlessly elegant shape of the sleeves. Note how the jacket sits into his waist, and the way the tails follow the shape of his hips. Tailors call this a "body coat" for a reason: it has to be exactly fitted to the wearer to give that sort of shape. Look at where it is buttoned, and how much of the waistcoat is seen. Notice the steel grey cravat and detachable wing collar. And finally, look at the trousers: they fall straight to the top of the shoes, with just a hint of a break.

Now take a deep breath, and let's turn our attention back in to the Prince. 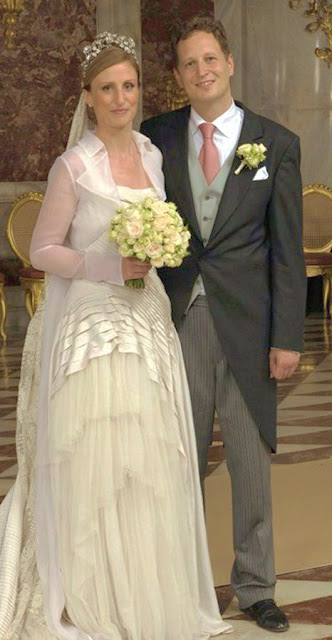 This is just so utterly, completely, indefensibly wrong it makes my head reel. Georg looks like a little boy wearing his father's clothes. That coat couldn't be a worse fit if he'd tried. Oversized, shapeless shoulders hang off of his arms, the collar gapes off of his neck, the sleeves hang nearly to his knuckles. And the fronts are an affront. The pulls, the wrinkles, the gaps, the hangs -- and that's without even mentioning the stalk of cauliflower that seems to be stapled to his lapel.

The trousers are a good deal too long; but it's hard to tell exactly how long, as he seems to be wearing them on his hips -- notice the waistband and bit of shirt showing under his waistcoat. Baggy, loose, and shapeless, the legs so thoroughly engulf his scuffed, unpolished shoes, that he quite literally walks on his hems. Remind yourself again that this isn't just some schlub getting married at Myrtle Beach -- it is the great-great grandson of Kaiser Wilhelm II.

His bearing, posture, and gait are all awkward and uncomfortable, as if he is befuddled by the prospect of wearing a suit at all, as if he was awakened one morning, poured into the nearest available outfit, and propped up against the altar; but this could simply be the result of wearing clothes that fit so poorly.

We must also reluctantly cast our gaze under his awful, costumey jacket, to the grey polyester waistcoat, so bland and shapeless and dull, of which we can see so much, and his floppy-collared shirt -- and (ahem) his pink tie. Who told Prince Georg Friedrich Ferdinand of Prussia, head of the House of Hohenzollern, that a pink tie was a suitable choice for a wedding? Was he dressed by a tailor? Did anyone give him any sartorial advice at all? Was there no one, no one, who could have taken his man aside, and in a low and confidential voice, murmured in his ear, "Sir, your outfit makes you look somewhat of a prat. Perhaps a visit to a tailor...?"

The problem here isn't merely that the good Prince's outfit is horrible and misshapen, although it is. It isn't really even that he should know better. There are tailors who know better; that's what they are there for. Notice the Prince is quite happy in all of these pictures, blissfully ignorant of the crimes he is perpetrating on formal wear. The problem is that no one seems to care. We have drifted so far from sartorial propriety that men are apparently expected to dress badly. A suit like this doesn't elicit so much as a bat of an eye from the so-called fashion experts, who will nonetheless happily dissect every stitch and detail of the ubiquitous white dresses. 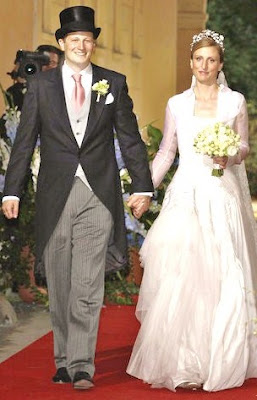 If Georg had only bothered to put in the same effort as his new bride, instead of just showing up in a ill-fitting rental, and shown through his attention to detail that marrying her was just as important an event to him, as marrying him was to her. He could have gone to one of the legendary German bespoke tailors, who, using Rundschau, would make for him a classic ein Cut suit that would have made him look like a man, instead of an overdressed boy.

And he would get a good deal more use out of it than a half-hour on a single day.

Click here to go to the previous essay chronologically.