Chapter 52
Awards shows are coming thick and fast this time of year! The Director's Guild of America awards came and went with no press or fanfare to speak of, because who wants to see directors? The SAG awards, on the other hand, got the usual prime-time treatment; actors being so much more telegenic and all.

Unlike the other big awards shows, the Screen Actor's Guild (the actors' labor union; because apparently actors need leverage for higher wages) is unique in that the actors basically give themselves awards. If this sounds self-serving, that's because it is, thank you very much, and they give no apology for that. They will insist that the SAGs focus is the serious business of The Craft rather than mere popular celebrity, and I'm sure there are some that actually believe that. The tone is purposefully a bit more laid-back than the Globes or Oscars -- the participants sit at tables swilling booze instead of perched on theater seats, and a strange form of formal wear has developed among the men; a sort of Black Tie Lite.

Women are very attuned to shades of formality for any given function. Indeed, the dresses at any given event largely set the tone for that function. Mens' formal wear has historically been the visual background upon which the dresses operate -- that is, in fact, its function. White Tie is full formal; Black Tie is semi-formal. Variation within that is restricted to details of cut, not of the variation of formality itself.

At least, it used to be. Men have apparently gotten confused on this point, and have applied shades of formality to their clothes as well. This is because men have forgotten how to dress, and have started looking to women for direction. As a result, the SAG Awards, already saddled with the burden of the appearance of a dress-down affair, has done very little to champion the cause of proper men's wear.

You will notice I make no mention of who the famous-maker labels are when I cast my critical eye at the stars' (ahem) "tuxedo" choices. This is intentional. What makes a good tuxedo has nothing to do with the stylist who made it. It has everything to do with fit, with proportion, with the harmonization of the lines of the suit to the personality of the wearer. By divorcing the name from the suit, there will be no temptation to think that a horrid tuxedo is somehow made more acceptable because of the famous designer behind it: let it stand or fall on its own merits. 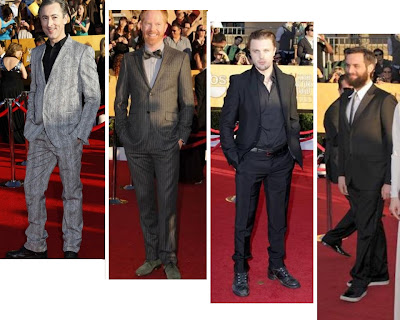 Any pretense of Black Tie in many cases was completely dispensed with, and goofy shoes, loud ditto suits, and open collars were a-plenty. We shan't even discuss such aberrations here. Women can get away with such variations. Men should not. 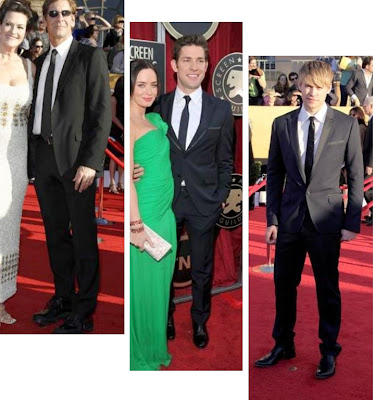 What was noticeable is the preponderance of simple black suits. It's almost as if there is a new semi-formal: a semi-semi-formal -- a quarter-formal, if you will -- comprised of chunky shoes, low-rise black pants, skinny black long tie with white shirt, and black jacket. The jacket may be plain, or with some sort of edging on the lapels and trim, but they are noticeably not  traditional dinner jackets.

A prevalence of wrong, however, does not make a right. Let's take a brief look at the "quarter-formal" craze on parade this week.

Bryan Cranston's beautifully-cut black suit is still a suit. Elegant attire for a funeral...not a party. 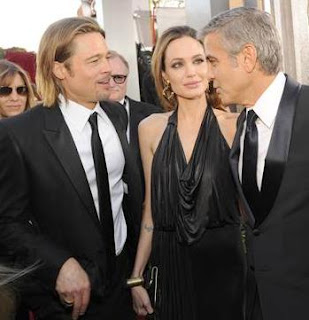 The Pitt and The Clooney, in stark contrast to their acceptable turnout at the Golden Globes recently, appeared in "quarter-formals." Shawl collars like Clooney's, perceived as the least formal lapel style, were popular among the few attendees who opted for a proper dinner jacket at all.

Steve Buscemi, who nearly always appears in a long tie, regardless of its propriety, at least deserves a bravo here. Long derided by me for wearing poorly-fitting tuxedos, he seems to have at long last found one that fits him. Still, narrow lapels do nothing for Steve, as you can see here. A generous "belly" on the shawl lapels and a bow tie would have made this outfit truly pulchritudinous. 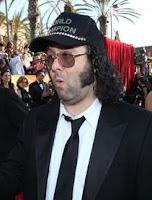 No amount of preparation from handlers or agents can compensate for sheer stupidity. Judah Friedlander apparently can't separate person from punchline. This is just beyond stomach-churningly atrocious, a reprehensible manifestation of his deficiency of character. He should never have been allowed through the door looking so offensive. It is an affront to everything that the Screen Actors Guild is supposed to stand for: respect for acting as a collaborative art. What a self-absorbed, egotistical, conceited excuse for a thespian.

Thankfully, some actors knew enough to know what Black Tie means, and held firm against the quarter-formal trend. Notable for his precision was Armie Hammer, who wore an expertly tailored tuxedo. It's rather severe lines were a perfect complement to Elizabeth Chambers' minimal dress.
A simple cummerbund would have rendered this execution transcendent.

Alec Baldwin, not surprisingly, was similarly appropriate. Seems he's learned something from his character on 30Rock, Jack Donaghy. 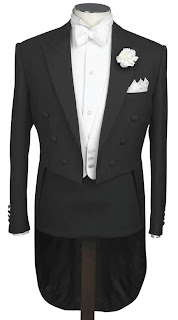 What do we make of this bizarre quarter-formal trend? First, it's the natural declension when semi-formal becomes equated with full-formal. We mustn't forget that Formal evening wear is White Tie, technically called a Dress Suit. It's comprised of a body coat with tails, matching white pique bow tie and waistcoat, stiff-front shirt with detachable wing collar, and formal pumps. It's the most formal "uniform" that a civilian can wear.  It is also not to be forgotten that White Tie is essentially a party outfit, worn to fun events where there may be dancing, games, and laughing. It is not a somber or serious mode of dress. All the events that we see today as Black Tie, were at one time required to be White Tie. 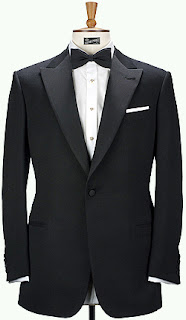 Black Tie, technically called Dinner Dress, is NOT formalwear. It is SEMI-formal. It only became acceptable to wear the Tuxedo (its Americanized name) in mixed company in the last century. The origin is in loungewear: a sack-cut jacket with matching grosgrain lapels, bow tie, and waistcoat, worn with a fold-collar button-front shirt and balmorals. It was a more comfortable, looser-fitting suit to wear after dinner. Only after it became a commonly used dinner suit, did it become standard to wear Black Tie to events previously considered formal.

Full Dress and Dinner Dress have been traditionally worn side-by-side at events: the two are not mutually exclusive. Those who could not afford the proper attire could thus substitute the best they could afford, even if it was less than ideal. (And make no mistake: Full Dress is a shockingly expensive bespoke bit of tailoring!)

There has never been a need to have anything less formal than semi-formal. Black Tie is comfortable, easy to wear, elegant, and has been refined over the decades to the point that its proportions have been perfected. Yet for some reason, Black Tie today is perceived as stuffy and rigid, and a need is seen to pull away from this imagined austerity into --what? The new quarter-formal? A black suit?

Let's hope not. Black Tie as it exists serves an important function as semi-formal evening wear. It is flexible enough to be seen in a variety of venues, from simple dinners out, to extremely formal affairs just "one notch removed" from White Tie. It shows the people you are with, that you think of them with admiration and respect. It demonstrates an affinity with, and knowledge of, the past, and a continuity with history. It establishes that you know the rules, and are willing to show yourself as equal in all measures to the men with whom you are sharing your time. Black Tie is not a stagnant fashion, but timeless style that transcends the ages. The aberrant quarter-formal will find its way to the dustbin eventually, and the sooner they are, the better. Don't be found a fashion victim...when the venue calls for semi-formal, do it properly.

And please, leave your baseball caps at home.

Click here to go to back to the previous essay chronologically.