(Part 5 of the series, "The Secret Life of the Tie.")
Chapter 83
If you're just joining us, we've spent about a month on a Grand Tour of the History of Mens' Neckwear so far, and we're bookending that series with a month-long look at modern neckwear -- we are spending time on one distinct variation per week. By the time we're done here, you will know everything you need to know about making wise neckwear choices both common and esoteric.

Just in time, too -- Labor Day is come and gone already, and before you know it the trees will be turning, the weather cooling, and the time for autumn coats and tweeds will be here. We discussed the turning of the wardrobes last year at this time, if you're in the mood for a more seasonally-relevant installment.

Last week we cast our gaze toward the long tie, so it follows that this week, we'll look at the counterpoint to the long tie: the second-most popular form of neckwear -- the bow tie.

It is the opinion of many popular fashion bloggers on the Interwebs, intelligent chaps many of them, that a bow tie should not be worn every day. 'At best, bow ties should be sprinkled lightly throughout your wardrobe, perhaps once a week or so,' they say. (They place no such bounds on the long tie, and would happily dictate that they be worn every day of your life until you die.) These bloggers, some with hundreds of thousands of loyal followers who hang on their every word, are adamant that a bow tie breaks some unspoken bound of propriety if worn with any regularity.

Read closely, O followers of mine -- these bloggers are WRONG. Completely, utterly, wrong. There is absolutely nothing wrong or improper with wearing a bow tie every day of your life. Those that disagree, simply have an improper understanding of the bow tie.

If your idea of a bow tie is a big, loud, jarring splash of color jutting out awkwardly under your chin, you can be forgiven for thinking a bow tie is only for the especially festive occasion, or where you really want to be the center of attention. If you've been a reader of Dress Like A Grownup! for any length of time, you know the thread that wends its way throughout all my posts -- my maxim for dressing well is balance. All parts of any outfit have to be in harmony with each other, and with your own personality. No one element must stand out or attract undue attention to itself, but contribute to a cohesive whole.

This applies to the bow tie as well. The bow tie itself is unusual enough in its form, that its color and pattern can be muted considerably in comparision to a long tie, to preserve a balance in the outfit. Many mass-produced bows are, in my opinion, far too bright and garish for everyday use. The solution is simply to tone down its colors to be more in line with the palatte of your jacket.

Most importantly, the bow tie is uniquely suited to complement the shape and size of your face. It frames the face, drawing the eyes of an observer up to your expression. It shouldn't overpower your face or dazzle an observer's eyes. Indeed, the tie itself should be unobtrusive, lending support but not taking center-stage. Women understand this better than men do, as a rule, for more of their clothing is designed specifically at directing attention to various parts of their anatomy.

Any individual bow tie has limited flexibility in accommodating differing face shapes. The typical bow tie works with a wide variety of "normal" morphologies, fortunately. For odd face shapes, a well-crafted custom bow tie can work wonders in a subtle "normalizing" of wide jaws, long necks, pointy chins, jowly cheeks, or any number of facial peculiarities, by visually offsetting them with their counterpoint.

Knowing how to tie a bow, is of course prerequisite to being able to follow what we're talking about here. It's been mentioned in a previous installment, but here is a refresher course if you need it. There are two methods, some may find one way more natural than the other:
Now let's look at what can be done with a humble bow tie, merely through slight alterations in the cut. First, let's get a baseline reference with the average proportional standard for a bow tie. 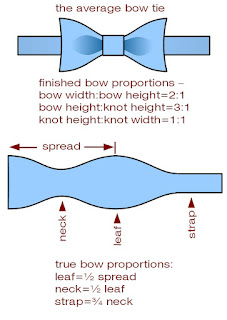 This is the proportion to which most mass-produced ties are cut. It produces a smallish, square knot, which gathers the leaves into a dimpled pinch and gracefully curved butterfly-shaped silhouette. A tie should be sized so that the spread is equal to the width of your jaw, and the pinch through the neck should follow the prominence of your chin. (The ties' neck, that is: not yours. It's important to have the terminology well in-mind for this post.) This average proportional style will suit most men tolerably well.

For men who are not "average," custom or bespoke ties are an appealing alternative for the bow tie wearer. For example, the standard sort of store-bought bow tie may look out of proportion on very large or small men, but a custom bow can be scaled up or down to suit large or small men as needed. 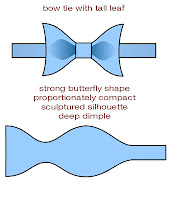 Let's look at what happens when we take this proportional standard, and change one dimension at a time. We'll start with a slight increase in the height of the leaf, while all the other dimensions remain the same. The shape of the butterfly becomes exaggerated, both in profile as well as three-dimensionality: the leaves curve out at the tips and the dimple deepens. The added height of the leaf causes both spread and knot to appear smaller. This can offset a short neck or double-chin, by visually emphasizing the point of  the chin, or adding verticality to the neck. 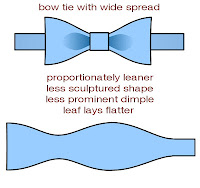 Next, we'll take the proportional standard, and increase the width of the spread.

The effect is the opposite of the tall leaf, and visually corrects the opposite issues, viz., a pointy chin or long neck, by emphasizing the horizontal lines. 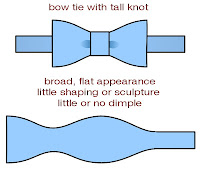 Now, using the same proportional standard, we'll apply a tall knot, by tying the strap loosely around the neck, without compressing the neck overly much. This is a good method to counter a slender build with a weak chest, by giving the tie a flat, broad face. 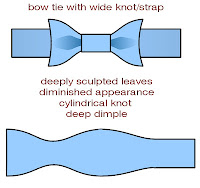 This is the same proportional standard, but this time the strap is wide, perhaps to give a good effect to a stand collar. Tying a wide strap around the neck results in triangular leaves, well-separated, with a deep dimple running though a barrel knot. It tends to counter a husky build with broad shoulders. 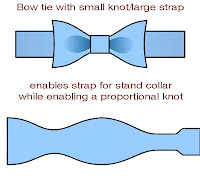 A proportional standard tie can be constructed with a wide strap, by cutting the strap down just where it forms the knot. This separates the width of the knot and the width of the strap, which can enable the tie to compensate for multiple issues. 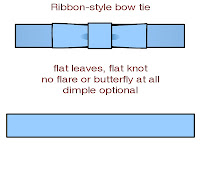 Reducing the leaf, neck, and strap to the same width results in a ribbon bow. The strong horizontality can offset many issues with over-verticality in morphology, especially a long or oval head-shape. 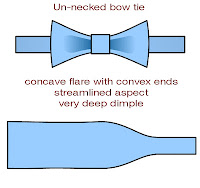 Eliminating the neck from the bow, forms a "straight" or "paddle" shape. The leaves are gathered strongly into the knot, giving the bow a three-dimensionality and economy of line to help offset a lean or craggy face. 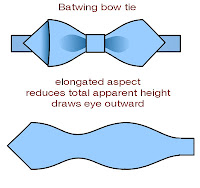 Adding pointed tips to the leaves, caused by finishing the ends along the grain of the fabric instead of along the bias, creates the "batwing" shape. The tapered leaves add visual width to the bow without bulk. It can help the square jawed, broad shouldered but thin build, more effectively than a tie with simply a wider spread, which adds bulk to the width. 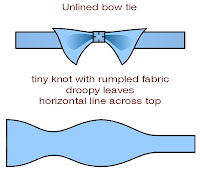 A common way for bow ties to be constructed is without any sort of reinforcing lining inside. The resulting bow is quite floppy, and the fabric squeezes into a tiny knot. This was a popular style in the 1940s, as the minimal knot offset the broad-shouldered suits of the era.

The effect is decidedly insouciant, but there is always the danger that an unlined bow tie will appear too droopy and sloppy in today's dress-down world.

Don't fear the bow -- give it a try, even if you never have given a thought to it before. Go to any men's store, and they'll have a few on hand. If you're lucky, your go-to second-hand store may have some as well. Go exercise your sartorial prowess*, pick out a sedate pattern in the proportionate style, and give it a try!

* If you have any doubts re: your sartorial prowess, read this blog from the very beginning right now.

Next week, we'll move on to a form of neckwear you definitely won't be wearing every day!

Click here to go to the next essay chronologically, Part Six of The Secret Life of the Tie.

Click here to go back to the previous essay chronologically, Part Four of The Secret Life of the Tie.