﻿The Wedding of the Century, version 2.0 (beta)

Chapter 12
I have self-imposed jet lag. Last night, I turned the clocks ahead five hours and went to bed early, in the hopes that I could trick my brain into thinking that I awakened to a restful eight o'clock, instead of three in the morning.  It worked; today, I am running on Greenwich Mean Time. Thanks to the BBC, I had a front row seat this morning, to every second of the You-Know-What...in real-time.

Why on earth would I put myself through this? For you, dear readers, all for you. (You can thank me later.) For the foreseeable future, you will be media-inundated with What She Wore . On this blog, we don't care about the gowns and dresses and awful, awful hats. We want to know what the MEN wore, and it's a sure bet that no one will mention a word about it...No one -- except me!

First, of course, I would be remiss without the traditional rant -- a few words about the wedding itself, from my perspective.

In America, we love fairy-tales: the attractive but otherwise ordinary girl who is discovered by her Prince Charming and lives happily ever after. We also love shoehorning non-fairy stories into the fairy tale formula, regardless of facts. Back in 1981, we were assured a "fairy tale wedding." Pah! Diana was no commoner; while not royalty, she was nobility -- already a member of the titled peerage, before she was shoved in Charles' path. Make no mistake, that train-wreck was ultimately a pairing of political expediency...and we all know what became of that.

This time around, we're fed the same story, but this time we're assured the princess really is a commoner -- "two generations from a Yorkshire miner." Well, yes, but one generation from a successful airline pilot, and the daughter of a very successful party planner. Successful enough to put his kids through the right schools, and then wily enough to steer his kids to a school where eligible royalty attends. "Commoners" don't usually find themselves in circumstances like that. Kate might not have been nobility, but she was also certainly no Cinderella. (If there's one thing Americans love more than fairy tales, it's a good conspiracy theory.)

The first public royal wedding was as recent as 1911, just happening to co-incide with the advent of moving pictures. Previously, weddings were a secretive event held in the Royal Chapels: without mass media, there was no reason to involve the populus. Since weddings were often power grabs among nations, by pairing up and marrying off their children to each other, it was an internal political matter anyway.

This particular nuptial reflected the Queen's softer, fuzzier New Monarchy better than any so far -- aided by 1) a simpler ceremony than, say, a coronation; 2) a more informal procession, since William is not the heir-apparent; and 3) Kate's input into the wedding details. Fortunately, the destiny of the warm-and-cuddly People's Monarchy seems to be rosy for our future descendants under King William V and Queen Catherine...Kate is winsome enough, and both William and Harry take after their grandmother's don't-you-wanna-hug-her-like-a-teddy-bear personality, more than their aloof father's.

For the observant today, the 85-year old Queen was everything you'd want from the most powerful person in the British Empire. She scooted across the seat of the Royal Bentley, disembarking at Westminster Abbey on Prince Philip's side in a most un-regal manner. Trumpet fanfares, H.R.H.'s and God-Save-The-Queens seemed incongruous for this little old lady, smiling and chatting like Everybody's Favourite Grandma, completely nonplussed by all the pomp, sitting in her little yellow dress with the yellow top hat on the little throne with the little lion's heads on the arms. Royal, yes, but not regal; just like us, she realizes that her position and power has nothing to do with her, so she just enjoys the retirement package. (Philip sang "God Save the Queen" with a sweet earnestness that was quite touching. Old couples are so cute.)

Enough of that -- onto the clothes!

The common take among the fashionists pontificating over the event today, is that men have it easy at formal events: the women have all the hard decisions, the men have no choices to make. Nothing could be further from the truth. Women's fashions? Sum it up by saying the garish colors and ridiculous hats worn by the proles waving Union Jacks and hooting on the far side of the cordons, were far overshadowed by the utterly absurd frippery worn within the walls of the Abbey. Tendrils and tentacles, fronds and feathers, satellite dishes and stuffed blue toucans, every ghastly variation of nonsensical headwear was in attendance. The going trend is an inexplicable attachment on the forehead, and extending over the eyes.

By contrast, male dress is always at least nice. It's in the successful manipulation of the details that menswear can pole-vault into the realm of the sublime. While countless minutes were spent wasting drooling commentary over things like Victoria Beckham's head-mounted rubber doorstop, the infinite variations of men's morning dress in attendance were not even commented upon, and that's a shame.

Of most notable importance, is that these examples of proper wedding attire are solely the province of the guests. The worst-dressed man at the Abbey was still better dressed than 99% of the bridegrooms and groomsmen in America, with their cheap black rental dinner jackets and clip-on bow ties.

William and Harry, of course, were in military uniform; and military dress is always the most proper thing to wear to these occasions if you have the ability. 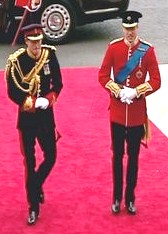 William could have worn his RAF uniform, but instead opted for a bespoke Irish Guards Colonel's uniform, (made for him by Kashket & Partners of Mayfair,) as it is of higher rank than his RAF. The colonel's rank is honorary: it is often given to a member of the Royal Family, as patron of the Irish Guards' interests. The scarlet is certainly more dashing and photogenic than RAF blue, and he displayed only the Order of the Garter sash and star, Golden Jubilee medal, and RAF wings. He presented an unusually uncluttered and neat appearance, especially compared to the gold cords and braids of Harry's uniform, which looked like an entire schooner's rigging thrown over his shoulder, and his father's overwrought uniform of the Navy Admiral.

The order of the day for the civilian guests, with very few exceptions, was morning dress.
﻿﻿﻿
﻿﻿﻿

(Most notable exception: the king of Tonga, who arrived with his usual style in a more-formal-than-formal double breasted grey full frock coat.)

Generally speaking, morning dress is a dark grey jacket that has tails that cut away gracefully from the front button, around and down to just behind the knee, worn with a waistcoat and striped trousers. But that's like saying filet mignon is, generally speaking, bovine meat wrapped in pig meat: it just doesn't convey the whole story.

You could tell at a glance, by the exactness of the fit, who owns their own bespoke morning suit, and who bought off the rack. And then there were the dozens of types of lapels: peak and notch lapels, some gorges low-set and others fairly flying off the shoulder -- narrow, skinny, straight, wide, flared, bellied lapels. Some trousers matched the coat, some had wide bold charcoal stripes, some narrow stripes, I even saw a tone-on-tone in a very subtle grey. "The same old suit." "No choices to make." Yeah, right.

But where the variety truly lies, the greatest venue for personalization, is what happens under the coat. Waistcoats were of every design and color imaginable; from dark blue silk brocade to pastel pink, but mostly there were shades in the traditional grey or buff. Styles ranged from high-buttoning to low, lapelled or plain, double or single breasted, points at the front or straight-cut, angled or scooped crossovers. I saw at least one slipped waistcoat -- an extremely elegant and subtle touch that most people never even notice.

The shirts were all a simple fold collar (save for one Beckham exception,) some of which were detachable and moderately starched. British spead-point collars of various degree predominated. Ties tended toward the bright, solid, Easter spring hues, and pocket squares, although not universal, were a-plenty. The old guard distinguished themselves apart from the newbies, not just in the cut of their coats, but in their use of the hat. Morning wear dictates a top hat. Those familiar with them, wore them. On their head. Not in the Abbey, of course, but while waiting in the queue beforehand. Most went hatless, and those who merely held their top hats self-consciously in their hands were conspicuous (ahem, Beckham again). Their hat shame is truly odd, considering the atrocities attached to the heads of their dates.

This is not to say there weren't badly-dressed men there. One celeb present looked notably disheveled, even in his bespoke coat. But "worst-dressed," in a morning suit, beats the best dressed rental tux any day. The point being is this -- dressing well, correctly, and like a grown-up isn't difficult. It's just knowing what the guidelines are, and expressing yourself within that framework. The variety of tastes and styles expressed in all those morning suits were just as personal as all those loud, obnoxious, pretentious dresses and (let's face it) silly hats. Very few of the men came out looking foolish, and most of them looked just grand.

(The photos used on Dress Like A Grownup! are copyright their respective owners. I have reproduced them here in accordance with the Fair Use clause of U.S. copyright law, Title 17 section 107 of the U.S.Code, which permits their use for scholarly, education, or research purposes.)
Posted by Mr Thompson at 5:24 PM