The Game's A Foot

Chapter 9
Last week's April Foolery was a right bit of fun (you did realize it was a joke, and didn't go out and buy a closet full of top hats...right?), but put your Serious Hat on now, because this week's topic is fraught with significance -- Shoes.


It's a simple enough concept: a protective layer twixt your feet and the rocks beneath, a simple necessity of life. Unfortunately, that is the extent of many men's knowledge of shoes -- but grown-up dressing demands thinking beyond merely being shod with ones between plates and tuppence.*


*Rhyming slang: ones and twos (shoes) between plates of meat (feet) and tuppence a pound (ground).

The thousands of shoe styles and variations can be overwhelming for us guys, which is why your "default setting" is most likely that with which you are most familiar. In other words, what you grew up wearing. And that, unfortunately, is kiddy sportswear.  The typical "shoe store" offers nothing but a proliferation of Nike, Adidas, Reebok, Sketchers, ad nauseum, in hundreds of variations, and at a price point for every wallet. Aisle upon aisle, rack after rack, all the same stuff. The Helpful Salesman, if he acknowledges you at all, will mumble, "Wot size erya?" before trundling off to The Back, to return eventually with boxes of more stuff, hopefully in a size that a Chinese craftsman half a world away reckons would fit you. So you lay down your dollars, and you leave the store with a white canvas-and-rubber abomination adorned with a filigreed fretwork of appliqué swooshes, stripes, and mesh perched on a snow-tire tread that conceals snake-oil frippery like air bladders, aerogels, springs, and valves. And you wear it everywhere, until the dingy grey mess disintegrates into ribbons. And then you go back a few months later to buy another.


I want to introduce you to the world of adult male footwear. This is just the barest introduction, mind you: there are other dedicated sites that cover the intricacies of construction and stylistic detail of felicitous footytogs, and if you are interested in such things, you can graduate into that. For now, for here, I'm giving you what you need to get by and get started.


All shoes serve the same function, viz., keeping pebbles out from between your toes. So why all the fuss? For the same reason I've been railing on and on about proper clothing and Classic Style and the hideousness of tee-shirts since the beginning: just covering yourself isn't good enough. There's a rich history of style waiting to be tapped, and for some reason even some of the best dressed gents forget about their feet.

Remember the Great Secret I revealed in Chapter Two? The purpose of clothes is to make you look better than you really do. That doesn't stop at your ankles. A good shoe is a work of art. The old maxim is true -- women really do judge you on your footwear. And nobody wants to see your ugly knarly hairy toes in public.

At the risk of being simplistic, there are a few technical terms of historical significance to use when describing a shoe. At one time, which shoe, in what style, in what color, at what time of day, for what purpose, was of utmost importance to know, to avoid embarrassing social gaffes. Those rules have slackened today: if you are interested in absolute historical correctness, the rules are still out there -- but for most of us, a few basic guidelines will suffice.


I will pare the field down to two basic styles and some of their variations for you. Learn these two basic types of shoe, and much of your battle is already fought. These two shoes are the balmoral and the blucher. The basic difference between a balmoral (British "oxford") and a blucher (British "derby") all boils down to a detail in the manner of the lacing, that you may have never noticed.

﻿
﻿On a balmoral, the vamp of the shoe (the piece that covers the instep) is laid over top of, and sewn to, the bottom of the lacing eyelet tabs. The lacing is in a V-shape at the bottom, the tongue is sewn on separately, and when the shoe is tied, the tongue is completely concealed. This is called "closed lacing."

With a blucher, on the other hand, the vamp and tongue is one piece, and the eyelet tabs are laid on top and sewn on the edges, but is unattached to the tongue at the bottom. It is easier to adjust the fit with a blucher, as the side flaps can be loosened or tightened across the tongue, and is called "open lacing." Of the two, the balmoral is considered the more formal, and needs to be more carefully fitted so it laces tightly without the eyelet flaps gapping.
﻿
﻿A blucher that has buckles instead of laces is called a monk strap shoe,
﻿
﻿


and a balmoral that is made of one unbroken piece of leather is called wholecut.


The following details can be applied to either blucher or balmoral: the cap toe, which is an extra piece of leather sewn to the vamp over the toe box, as seen in the above examples, and the wingtip, which is an extended cap toe that extends down the side of the shoe, and is shaped like a W over the vamp.


A spectator (British "correspondent") is any shoe utilizing two different colors of leather, usually (but not always) a wingtip.

A saddle shoe is closed-laced like a balmoral, but the eyelet tabs are sewn down over the vamp.


We need to make special mention here of brogueing: the decorative holes and designs on some shoes. They were originally of Scottish design, and were functional; allowing water to drain out when slogging across glens and bogs. Because of this, brogueing is traditionally considered less formal and more country-sporty, but today is pretty much acceptable anywhere. Full brogue has holes down the sides and over the toes in a decorative pattern, like this spectator shown above.


Half-brogue has brogueing in a decorative pattern over the toe only...
﻿
﻿

and quarter-brogue just has one line of holes at the edge of a captoe.

Finally, you need to have your shoes fitted properly, and that means finding a competent shoe store with competent salesmen.

﻿
﻿You've probably seen a Brannock Device, which was invented in 1927, and has become the world standard for foot-sizing. You can use the Device as a test for a good shoe salesman, who (if he passes muster!) you can feel confident will find a good shoe for you, and is not merely interested in you as his next sale. The trick is to ask to be sized. If the salesman sets your foot in the Device whilst you are seated, just walk away: he doesn't know what he's doing. When a sizing is done well, you are asked to stand: your heel is firmly placed against the stop and your toes are pressed flat. Width is carefully taken, and careful note is also made of the location of the ball of the foot, and height of the arch and instep.


A good salesman will not just look, but feel the shape of your foot. When you try on a shoe, a good salesman will double-check the position of not just the toe, but the position of your arch, ball, and instep inside the shoe as well: which involves more feeling around and manipulation. This may seem strange and fussy to your formerly Croc-shod feet, but real shoes fit closely and well. A new shoe may feel tight to you in areas, but the leather will in short order conform itself to your foot and become more comfortable than any old tennis shoe could ever be. A good salesman will be able to determine if the shoe is fitting and supporting you properly. There are many very good shoe makers out there. I personally favor Alden and Allen-Edmonds, (you can probably tell!) as they are both of fine quality, as well as being American-made.

You may notice this whole "fitting" thing would make shopping for shoes online a tricky proposition...and you'd be right. Online options are good sources for bargains in used shoes that, if new, would be quite pricey. Factoring in that used shoes can usually be recrafted and rebuilt to like-new condition for much less than actual new shoes, and it seems like an irresistible prospect. But fitting sight-unseen is a hit-or-miss affair: no two feet are alike, and even a used shoe in your size may have been inhabited by a foot with a much different shape than yours. Since the leather has been molded to a different foot, it may never truly feel like "your" shoe. 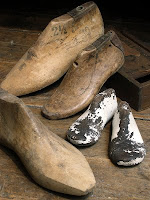 Fortunately, there is a way to narrow the field by a great deal, and increase the chances that an online used shoe will fit nearly as well as a new one. This is because of lasts. A last is the wooden form that a shoe is constructed around, and shoemakers use a number of different lasts. Before you shop around online, you should be properly fitted once: the shoe salesman will find a style of shoe that fits you more perfectly than the rest, because of the last it was built on. Ask him the number of the last of that shoe, and what other models are made on that last. All of the styles of shoes that company makes, in your size, on that last, will fit you equally well, in theory.

So, if you troll the online sites for those specific types of shoes in your size, the odds are the previous owner would have had a foot similar enough to yours that the fit will be extremely close, and (--bonus!--) already broken-in. So go forth, get properly fitted at a few places that know their stuff, and see what exists in the basic styles you've learned about today. Its the first step to better footwear, and the sooner you get started on the journey, the farther you can go. See you next week!

Click here to go back to the beginning.
Posted by Mr Thompson at 2:41 PM