Chapter 11
﻿Easter is a unique time of year! It gives us a chance to brighten our sartorial palette a little; try out linens and lighter pastel colors, experiment with new styles without fear of chastisement, even participate in an Easter parade!

Mention "Easter Parade" today, and most people will think of an old movie with Fred Astaire, if the term even registers at all. But did you know that at the turn of the last century, the New York Easter Parade was a retail event that was as big as Christmas? It's true! But how it got that way, and what happened to it since, is an interesting tale.

It could well be argued that the Easter Parade has roots that go as far back as Christianity itself, to what is referred to as the "triumphal entry" of Jesus into Jerusalem on the tenth of Nisan (April 6, 0032 *)
* reference Sir Robert Anderson's book The Coming Prince, pp. 95-105: he extrapolates the equivalent modern date from Nisan 10.

In an example of a proto-flash mob, Jesus' arrangement for a colt to carry him from Bethany to the temple in Jerusalem was met with a crowd of folks with palm fronds and cries of  "Save us! Blessed is the King of Israel!" If you have any sort of knowledge of Christianity at all, this image is a familiar one, as is this parade's antipode less than a week later: when public opinion changes somewhat, and the same man, beaten and scourged and dragging a cross, leads another parade, this time to cries of "Crucify! Crucify!" to a hillock called Golgotha, just outside the city. One would think this would be an anticlimax, but was actually the necessary building-up to what would prove to be The Most Important Day Ever.

In the early centuries of Christianity, Eastern Europeans, dressed in their finest clothes, would gather at a given location and walk together to their church, and then walk back afterwards as part of their Easter celebration: a re-creation of Jesus' two parades, they encouraged onlookers to join them, accompanied by songs of celebration.

Church clergy in the Medieval period saw the opportunity to use the Easter procession as a teaching tool, as congregants had no access to Scripture and couldn't understand the Latin Mass. By placing statues and paintings in vignettes along the route illustrating the "stations of the Cross," (important events that happened along the route to Golgotha,) the parade itself became an educational experience.

The convention of wearing your newest, finest clothes at Easter became a tradition in its own right over the centuries...but for good fortune in the coming year, not  out of respect for the occasion itself. The Renaissance wit Poor Robin in his Almanack wrote "At Easter let your clothes be new/Or else be sure you will it rue."

The Easter Parade in America started in the 1870s, again, as a sort of unplanned flash-mob. The churches along Fifth Avenue in New York decorated their sanctuaries at Easter with elaborate Spring floral arrangements. After services, some would go from church to church to see the various colorful displays. This quickly became a congregational event, then the other congregations would join in, and before you know it, you have a Procession. Since this was an upscale part of town, the parishioners were quite wealthy, and in their brand-new, expensive fashions, cut quite a sight. By 1875, it became a cultural event; the middle-classes would line the streets to see the new fashions; and Procession, plus Public, equals Parade. 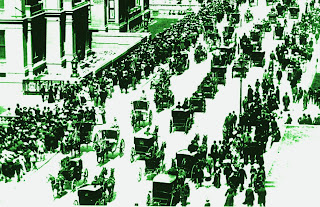 In the 1880s, spurred on by New York's success, other cities across the U.S. developed their own Easter Parades, but bereft of the original spontaneity of the Fifth Avenue parade, the emulations seemed to lack some of the original's éclat. 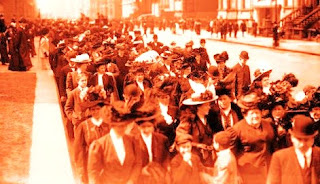 In 1890, the annual church-crawl that started 20 years earlier on Fifth Avenue was recognized as The Easter Parade, and was firmly entrenched on the socialites' calendar of cultural festivities. 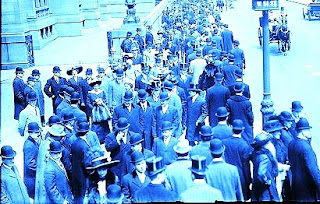 By 1900, the Parade had been discovered by shops and advertisers, and became a marketing byword: a sure sign that the bloom was off this Easter rose and the long slide into inconsequence was nigh. 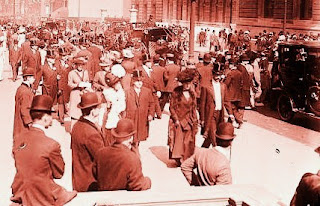 The Easter Parade was never without its detractors: upper-class excesses were more accepted among the Catholic and Episcopal churches of New York, but the more socially conservative Scots-Irish Presbyterians, Calvinists, and Baptists, with their "Protestant work ethic" of simplicity and frugality, observed that the extravaganza was beginning to glorify the possessions of the individual, over the celebration of Easter itself. The parade was well down the road to marching itself into complete secularization.

And then, as today, fringe groups of assorted nuts found they could use the parade to draw attention to themselves and their odd convictions. By 1950, the processions of the 1870s were unrecognizable. By the time the Parade had been radioed into the Soviet Union, (used for pro-capitalist proselytism!) it had become a deconstructed, purposeless melange of carnival showmanship.  The only remaining vestige of the Fifth Avenue Easter Parade as it exists today, is a Halloweenesque pastiche of ridiculous costumes, and antiquarians in their frippery. 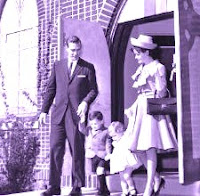 We've come a long way. You can make this Easter your own demonstration of refinement and dignified celebration, though, by turning the clock back to the early days of Christendom. Dress for yourself, dress in celebration, and when you attend church this Sunday, park a few extra blocks away, walk a bit, and encourage those around you to join you to your destination.

Click here to go back to the beginning.
﻿
Posted by Mr Thompson at 4:11 PM

Email ThisBlogThis!Share to TwitterShare to FacebookShare to Pinterest
Labels: History