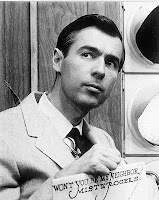 When Fred Rogers filmed the last Mr Rogers' Neighborhood on August 31, 2001, it was the end of an era. He had been on the air every week since 1963, an American (and even before that, Canadian) institution, and a cultural icon for a generation. When asked why he was shutting down production, his reasoning was simple: "I've said everything I set out to say."

This is Dress Like A Grownup!'s 100th Chapter. I set out with a goal: the Average Guy, who dressed in jeans and tee-shirts and sneakers every day of his life, should be able to start at Chapter One, and come out the other end with the knowledge, impetus, desire, and ability to be Well-Dressed. I think I have accomplished that goal, and to continue in the same vein would be to add unnecessary content that would either be repetitive, confuse the issue, or dilute the knowledge already set down.

So, starting in 2013, we're going to switch things up a bit, in content, style, and frequency.

Most notably, you won't see a new installment each and every week. The extended-essay format that Dress Like A Grownup! has evolved into takes a lot of time to produce, what with research, editing, writing, and compositing; and it takes a sizable chunk of the week to get it online -- usually the better part of a day or more, since I don't have a staff, and do all the work myself.

I could dial back on the length and complexity to keep the installments coming regularly, but to be honest, I don't want to skimp on content -- I'd rather take a little extra time, put the installments out less often, and keep up the quality of the essays.

Since we can put a final bookend on the Average Guy series, this will free us up to delve into some topics of a more advanced and tangential nature. Off the top of my head, we can look forward to a proper series on waistcoats, and a series on all the ways you can re-bash a fedora (that is, change the crease by hand without re-blocking.) I've wanted to do a series on detachable collars for quite a while, and we will surely get around to that; and that may lead into a series on shirtmaking.

For a while now, I've wanted to do a series on how to make all the cravats in "The Art of Tying The Cravat," in real life -- whalebone stiffeners, starch, and all. Of course, that wouldn't do at all in the old format, since the Average Guy has no reason to know such minutia...but in the new format, we can go a little crazy. (The Cravat series may actually warrant an entirely new blog to house it, since it will undoubtedly be popular with a certain number of historical costumers...we'll see how it goes.)

Most importantly, though, not tying myself to a one-a-week-installment plan will give me more time to do other things. The first thing I shall do is take a few weeks off, because no matter what you do, taking time off is important, and don't let anyone tell you otherwise.

After that, I'm going to go back through the first 100 chapters, to sand some rough edges down in the early posts as regards their tone and style, and to make the entire series more internally consistent.
(For example, in some of the early posts I referred to a "day cravat" as an "ascot." It was acceptable at the time, for I thought I'd never need to make the distinction -- but now that we've covered the difference, I saw the need to go back and change those posts to reflect the correct term.)

I'm also going to add direct links at the end of the posts to make it easier to navigate between the Chapters and the Series. One of the major drawbacks of a blog format is that it's deucedly difficult to simply read the posts in the proper order, especially if a Google search drops you in the middle of a series, so I'm going to address that.

Spacing out the installments, to maybe 3-4 major essays per year, will give me time to do other stuff. I have at least two more books in my head (not of a sartorial nature) that I'd like to get published, and the less writing I do here, the more writing I can do there, if you know what I mean. I also need to devote more time to Mr Thompson's Ties & Squares, as regards advertising and merchandising; and I have a plan to get my products in some brick-and-mortar stores this year as well. If my schedule comes down to This or That, I can pursue the business end without the pressure of getting the weekly blog installment out as well.

I'll keep a weather eye out on the awards shows, as always, and if something new and egregious happens that warrants a scathing post, I will of course be there...but it seems as if men are repeating the same mistakes of late, and I won't post after every show just to repeat myself endlessly about the low waists, bad fit, mini-jackets, long ties, and cheap tuxes, that I've covered many times before.

So stay tuned and fear not, Faithful Readers; I may not be readily apparent, but the blog is not forgotten -- I'm either working on old posts, or behind the scenes, or researching new essays for the future. And the previous 100 weeks will always be there, for new readers to discover how to Dress Like A Grownup!