Chapter 32
You know, you can't hit the ball out of the park every inning.
(Hmm...I wonder what the cricketer's version is? "You can't always score six runs a knock," probably.)
True in sports, true in great literature. After an extended run of hard-hitting, award-winning, world-class bloggy journalistic installments, you've got to expect the occasional bit of fluff.

And fluff we have, for most of my week was spent collating old posts that will be distilled into my new book.

That's right, sky troopers: Dress Like A Grown-up! A Complete Tutorial for the Average Guy, Vol. 1, is in the pipeline, and should hit the virtual cyberspace bookshelves in a few weeks. It's based on the series you've read here, but with more information; and in a different format. Makes a great gift, &c., and there'll be enough new stuff inside to justify paying money for the privilege of owning an ink-and-paper version of what you can read here for free. (Also with proper spelling. If there's one thing editing a book has shewn me, it's that I really have to start paying more attention to my spell-check.)

The future weeks here in my corner of the blogosphere are chock-full of plans for extended coverage on tailoring and alterations, awards snarkiness, Famous Men Dressing Poorly, and other interesting things, up 'til 2012 and beyond. This week, though, is light entertainment.

For this week, I bring you...the TIE.

We haven't done a lot of tie-centric discussions, for some reason. A lot about Classic style, suits, and such...but no ties. Much of this has to do with the seasons: My concentration, you've noticed, has been a demonstration of the possibilities for Spring and Summer wear that give tie alternatives. (Extra points for you if you had actually realized that!) But as the weather gets crispier, the reasons for NOT wearing a tie dwindle to nil.

The evolution of the tie echoes the evolution of the suit as we know it today. The cravats and stocks of seventeenth century fashions were largely replaced, by 1840, of what we would recognize today as bow ties and long ties. And in the upcoming months, rest assured we will cover that history in depth...but for now, we'll distill it down to just a taste.

Ties of all sorts had been disparaged greatly in the past decade; but have recently enjoyed a resurgence in popularity. Most notable is the renaissance of interest in the bow tie.

Today, the tie wearer has a number of options from which to choose:

The long tie, of course, is the form of tie with which everyone is familiar. In use since the 1840s, it is commonly recognized as a simplified and trimmed-down form of the cravat, which had been in use since at least 1622. The length and width of the tie changes widely over time, as does the preference for color and pattern: for example, immediately postwar, ties were very broad, short, and florid -- a scant fifteen years later, they became very long, narrow, and plain. Currently, we're happily in the stylistic sweet-spot, tiewise, of a width of about 3½ inches.

Mathematically, there are 85 different ways to tie a long tie; and of these, about a dozen, give or take, are in common enough use to have names. Physicist Thomas Fink compiled the definitive catalog of tie derivations.  You should have a knowledge of at least these three styles that you can tie from memory: the Four-in-Hand, the Shelby, and the Half-Windsor. It is very useful to have at least a passing knowledge of the Christensen, Kelvin and cross Kelvin, full Windsor, and Hanover, as well. Different knots can give the same tie a very different appearance. The size and shape of your collar, to a certain extent, also dictates the shape of your tie knot; as the two must coordinate. I won't go into the details of the different knots yet, simply because Dr. Fink has done such a thorough and exemplary job first; and as I said earlier, this week is light entertainment. You need to save his page to your favorites list and read it sometime, though. Think of it as extracurricular research.

The ascot, as used today, is a cravat in form, but somewhat different from the traditional cravat of the previous century. Most often it is reserved for wedding use when a more formal alternative to a long tie is needed. Black tie is evening wear -- the cravat is its daytime formal parallel. It is most usually constructed like a long tie, but with very wide, paddle-shaped ends of equal size, and the middle portion is gathered and pleated to fit under the collar. More traditional still is the cravat that is a simple rectangle, that must be hand-pleated and folded before it is tied. The cravat may be tied with a loose four-in-hand knot, secured with a tie pin, and must always be worn under a waistcoat. Alternatively, it can be tied like a bow tie with the loops pulled completely through, the ends crossed over the knot, and secured with a tie pin.

The day cravat or foulard, (often incorrectly called an ascot) is a less-formal form of cravat that is usually worn under an open collar. The usefulness of this form of tie can not be overestimated, and can be worn in many casual settings, year 'round. Day cravats can be thick and fully lined, or of the thinnest, breeziest madras. They can be constructed similarly to ascots, albeit with a middle portion that is wider, and pleated deeper, than their formal brothers. They can also be fashioned quite well from rectangular scarves. The great benefits of a day cravat are the visual bulk given to the upper chest, and the interest of color that a tie affords, without the distraction of a long tie flapping around. It also looks much more casual and informal than wearing a tie, but not as sloppy as wearing no neckwear at all.

As previous installments have shown, a day cravat doesn't have to be worn under a collared shirt: it is often worn with a polo shirt, or crewneck shirt paired with a jacket. The summertime resort style of a jacket sans shirt, worn with a scarf used as a foulard to cover the chest, has also been mentioned here. It is a very versatile piece of clothing.

Day cravats are tied most commonly in an Onassis knot, which is simply a Four-in-Hand where the tie end cascades over the knot. A day cravat can even be converted from a standard long tie in a pinch, by simply unstitching and unfolding the lower six inches or so, and knotting it close to the wide end.

The bow tie, as I mentioned, is gaining in popularity, and for more than just formalwear. It's tidy size and small profile compared to a long tie is instantly discovered to be more convenient and compact. You can tie it in the morning and forget it is there, since you're not constantly reminded of its presence by its constantly getting in your way. It frames the face well, and doesn't obstruct your shirt front. It is cooler in the summer. It is also more easily worn without a jacket than a long tie. You may have noticed that a long tie without a jacket or waistcoat to restrain it, looks out of place and somewhat awkward. Not so the bow tie: it, of all the varieties of neckwear, is best suited to wearing in shirtsleeves.

There are two ways to tie a bow tie. Many people find tying a bow tie confusing, so I've made up the best, simplest, and clearest graphics ever for you. Both halves, front and back, are clearly (and cleverly) color-coded: it's so clear there is no need for any written explanation. Both are shown reversed, so this is what you would see in a mirror. 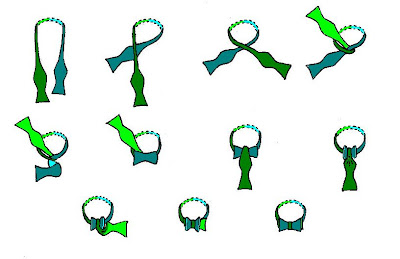 The most common method is to leave the left end a little lower than the right end, wind the first leaf around the knot, and tuck the second leaf behind the first. 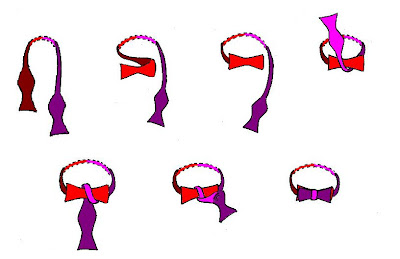 The second method is a bit simpler, easier, and quicker. You leave the right end much longer than the left, pull up the leaf first, wind the knot around it, and tuck the second leaf in front of the first.

There are a distinct benefits to each style: the first, which you will notice is tied rather like a shoelace, works best with thinly lined ties with pronounced butterfly shapes. It builds up a bigger knot, and "locks" the leaves firmly in place for a secure tie.

The second is well-suited to thicker ties with subtle shaping or wider straps. Since it is tied essentially in a slipknot, the knot is less bulky, and it is easier to vary the length of the leaves, the height of the knot, and the degree of pinch. It can also be worn loosened, which can be a great benefit in certain situations.

Both knots release easily by tugging on the ends, and it is well worth knowing how to tie both.