Chapter 56
A rare treat for you, readers! You have two Dress Like A Grownup! blogs this week: for I have guest-hosted the Who's the Dandy: Oscars Edition on Dandyism.net! Its concern is mainly with the best-dressed gents of the evening with some dandy observations; go forth and read it now! Really; go on. I'll be here when you get back.
. . . . . .

Back already? Good. Whom did you choose? Since now you've seen the best of the evening, let's waste no time and do what we do on this blog, which is look at some more winners as well as the sartorial train-wrecks at the other end of the spectrum.

Ofttimes, the winners of the technical awards, who rarely see the light of day, much less the glare of the limelight, were dressed better than the actors who live their lives in the world's scrutiny. Alaxander Payne, writer for The Descendants, despite looking awkward in front of the camera, still rocks a midnight blue shawl-collar dinner suit. Note the pleasing shape of the collar compared to the current trend of skinny lapels. Note the buttonhole in the lapel -- it's there specifically for a boutonniere. It serves no other aesthetic or practical function on a shawl lapel: so if you do have one, stick a flower in it.

Colin Firth: same tux (in black,) but the subtleties of presentation give a completely different effect. One, a writer. Another, an actor. What a difference a few years of acting can make! That, and the presence of the redoubtable Mrs. Firth. 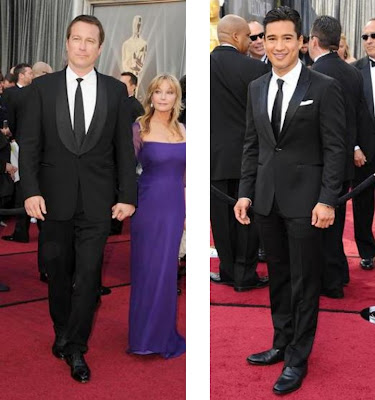 What do John Corbett and Mario Lopez have in common? The long tie? NO. Rather, that their dinner suits would have looked so very much better with a bow tie. Silk lapels visually fight with a long tie; they work along with a silk bow. Why aren't people taught this? 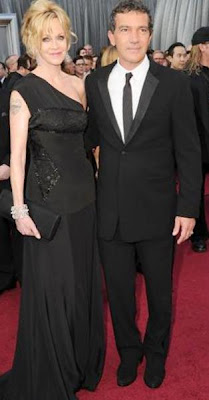 Antonio Banderas, what happened to you? You were once so suave and macho and exotic. Then came Puss-in-Boots and the Nasonex Bee. Now look at you! The tie, the lapels, the length...it would be hard to put together a suit that would make a man look more weedy and insignificant. 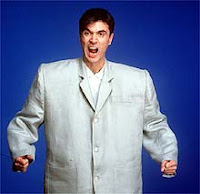 Except perhaps this. Matthew Lillard, with dinner jacket from the David Byrne Stop Making Sense collection. Honestly, Matt, you should have gone in for that second fitting. It's a tad large.

Oh, James Cromwell was a guest? I just sent him backstage for more gaffer's tape. How embarrassing. 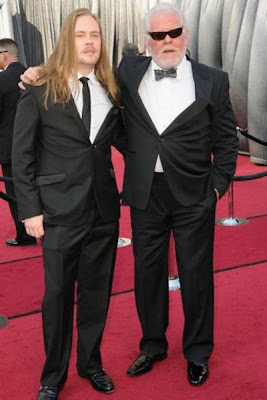 Sometimes, there's nothing to be done but go home and start over. Just....start over.

It's not all bad, though.

Gary Oldman wore a tux that was a little fashion-forward, but not embarrassingly so: the waistcoat adds what the silk taping and notch lapels take away. Without the vest, the suit wouldn't work for the Oscars. Maybe the Grammys.

There was a definite improvement over the year's previous hollywoody awards shindigs re: the number of waistcoats and bow ties that were worn. It doesn't take a lot; just a modicum of attention to detail, to complete the semi-formal look properly. 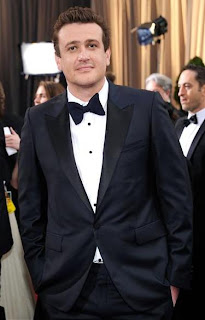 Jason Segal, as an example, is doing everything more or less right, save for the vest, which he badly needs to cover his waistband. Notice also, the awkward gap between his second and third shirt studs. A mistake? No, a tailoring detail: that gap is where the crossover for the waistcoat should be...

...as is ably demonstrated by James Earl Jones. Thank you, Darth Jones.

Finally, a few remarks relating to part one of this post, on Dandyism.net. I mentioned Dujardain's waistcoat-shyness during the evening, taking care to always fasten his dinner jacket. I find this perplexing, for a man who has taken fastidious steps to be otherwise well dressed. He should know it's always more proper to leave the jacket unbuttoned and show the waistcoat. He should also know his trousers are too long, but that could be a side-effect of cramming his hands in his pockets. And yes, technically dinner suits are worn with a stiff fold collar, not a wing collar -- but this doesn't mean that the wing collar is incorrect; merely more formal. In light of the fact that the Academy Awards used to be full dress, I find this completely acceptable; as it would be to wear a white tie and waistcoat with dinner dress. For a true semi-formal event, like an actual dinner party, it would be over the top.

And my answer to the question que es mas dandy? 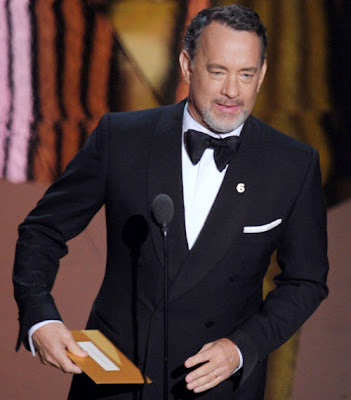 My choice is Tom Hanks' double breasted Edwardian togs. The fit is perfect, the casual tie is a perfect counterpoint to it, the details are casual, and, unlike nearly everyone else there, since a double-breasted dinner jacket is always to be worn buttoned, it needs no waistcoat and thus is being worn completely properly. Bravo, Mr. Hanks!