(Part 3 of the series "The Island of Misfit Clothes")
Chapter 36
This week, we'll continue in our mode of thrifty self-alterations by looking at the most common of trouser faults: a waistband that's too large. There are several different ways to save a pair of pants that would otherwise be unwearable. The best way, of course, is to take it to your tailor; who will detach the waistband, re-shape the side and rear seams, and reattach the waistband, resulting in a pair that fits you perfectly.

But that's not the only way! There are workarounds that are nearly as effective, and are quicker, easier, perfectly acceptable, and well within the scope of the average guy to do himself for free.

Let's look at the easiest way to take in the waist of a pair of trousers first. It's a quick and dirty method, to be sure -- but it is invisible to the observer, and completely reversible with a minimum of fuss. Most importantly, it works, although best when you need to take out no less than two inches. You'll see why in a minute. 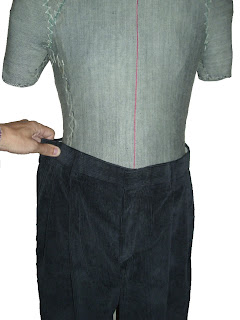 Here's the pair we'll be working on. A couple dollars at an estate sale for a nice pair of corduroys was too good to pass up...but I knew they'd be a little large when I got them. 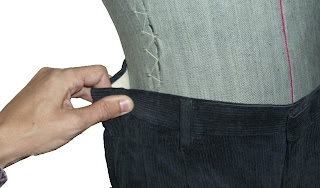 And so they were. Not tremendously large, but unwearable without taking about two inches out somewhere; so this method will work just fine. 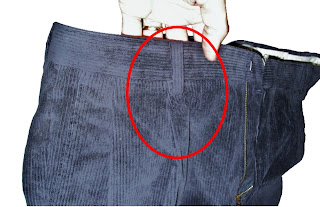 This is the area on which we'll be concentrating: around the front belt loop and the first pleat on both sides. The waistband will be shortened behind the belt loops on each side by an inch, and the pleats will be deepened by an inch to match. If this sounds daunting, don't worry -- let's go through it step by step. 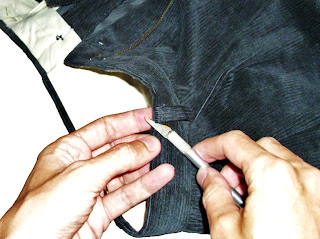 First, using an X-acto knife or a seam ripper, cut the threads at the top of the belt loop that attach it to the waistband. Be careful not to cut the fabric, just the thread. Keep the blade parallel to the fabric and work slowly until the top of the loop comes free. Pull out the cut threads. 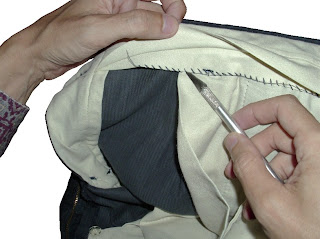 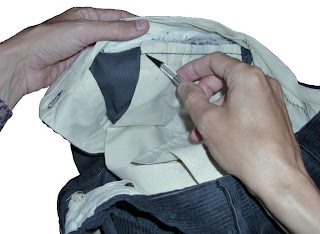 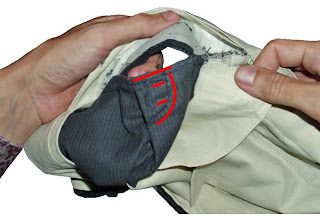 With the waistband detached and the pocket lining pulled back, the pleat will be revealed. It may be tacked as shown here: the upper and curved red lines show the additional stitching that holds the pleat in place. Cut these threads so the pleat is free. The short red lines show where the bottom of the belt loop is attached (you will note we already cut the lower of these stitches two steps ago.) 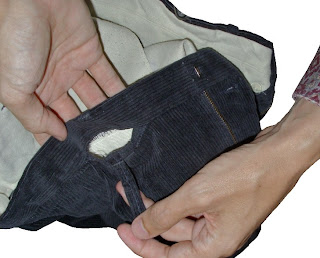 Turn your attention to the outside of the trou. The belt loop may be retained by a line of stitching: although some belt loops use the waistband seam itself to hold the belt loop on. 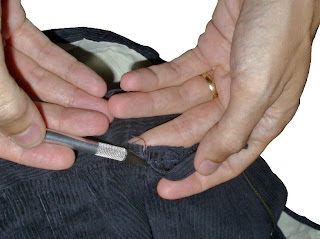 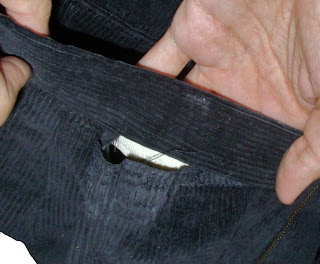 Now all the necessary threads are cut, the belt loop removed, and the pleat released. 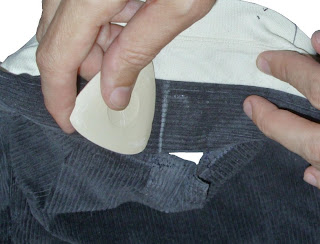 Make a chalk line at the rearmost edge of where the belt loop was. 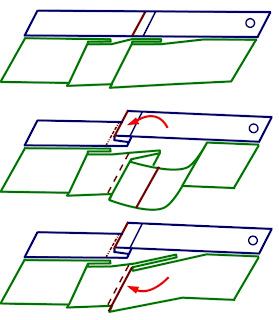 Let's look at a chart to get a better idea of where we're going with this. The blue is the waistband and the green is the leg. The top figure is where we are now: the primary and secondary pleats are shown, as is the position of the removed belt loop. The red line represents the chalk mark we just made. The middle figure shows how we are going to take in the waistband: fold back the band at the chalk mark by 1 inch. This results in a 1/2 inch pleat behind the belt loop, and an extra inch of leg remains that has to be taken in. The manner of deepening the leg pleat is shown, by marking the new pleat 1 inch forward of the old pleat line. The bottom figure demonstrates how by taking that marked line, and bringing it back to the original pleat line, the pleat is deepened by one inch, whilst keeping it in the same location. 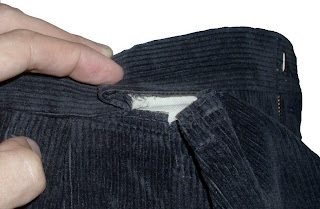 This is how to bring in the waistband. Just fold in the outside of the band; not both sides together, and pin it in place. 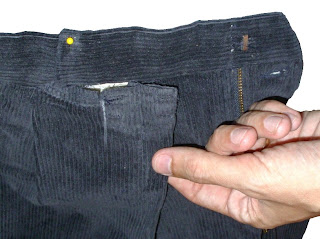 Mark the leg pleat as previously shown in the diagram. This shows the marking of the pleat line. 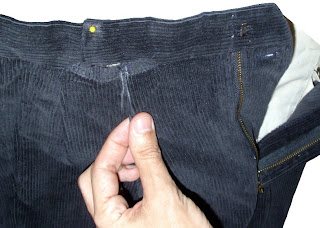 Pinch the pleat together until the two chalk marks line up, as shown here, and pin it in place. 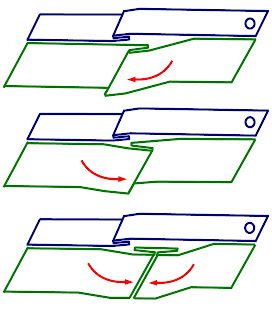 At this point, you can see there is no reason to necessarily keep your pleat in its existing orientation: in fact, you can introduce a new pleat to plain-front trousers just as easily. The top figure shows how to do this with a regular American-style forward pleat; the middle figure shows how easily this can be made into a European-style reverse pleat. If you have existing pleats, you can merely deepen them, make two medium-size pleats, three small pleats, or (as the bottom figure shows) even make a reverse box pleat. At this point it all comes down to your personal sense of style -- and one style isn't more or less correct than any other. In our example here, we'll stick to basics, and continue to deepen the forward pleats of a double-pleat front. 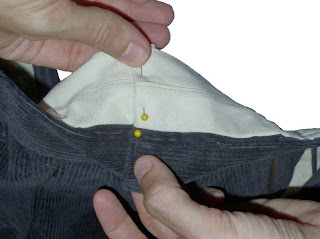 Now back to reality. Take your waistband and open it up flat as shown. Fold in the inside of the band to match the outside and pin it in place. Now run a single line of stitching down the fold, close to the edge.

Wait, I can hear you saying to yourself, do you mean stitching by hand with a needle-and-thread, or by machine? Well, either way works. There's nothing wrong sewing a running backstitch by hand, but it takes a while, especially working through all the layers we have here. Machine sewing, in my opinion, works best for this fix. Use a simple stitch, set fairly long; say 6 to the inch. Don't be intimidated by the sewing machine. Just remember not to make a rookie mistake and set the stitching too tight: you're not welding sheetmetal here. (You always want stitches to be weaker than the fabric itself: if anything rips, you want it to be along a seam, where it is easily repaired.) 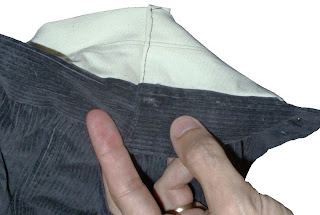 This is what it should look like after stitching. As you can see, it doesn't have to look perfect -- but if you want the job to look more professional, it is possible to do the front side and back side separately, and match the thread to each. 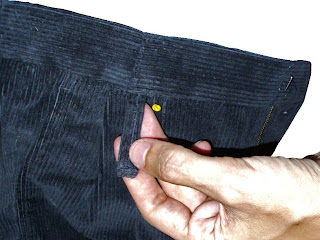 Turn the band over, smooth it down and pull it snug. Press it a bit with an iron if you need to. Tuck the leg back into the waistband: since both parts are now the same length, it should fairly fall right in place. Tuck up the tail of the belt loop into the waistband just far enough that the waist stitching will catch it, and pin it in place. If your waistband was topstitched, the next step is easier for you: just stitch along the lower edge of the waistband where the old stitching was. You can sew through all the layers at once, or hold the inner waistband out of the way for a more professional look. This pair is internally stitched, so it's a little more tricky. 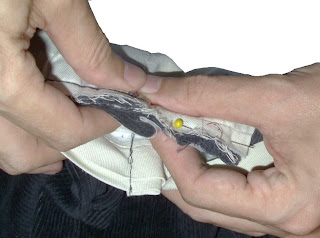 For internal stitching, fold the waistband over, pull the inner waistband out of the way, and line up all the raw edges, as shown here. Pin the layers together, and re-sew everything along the original seam line. Remember to catch the tail end of the belt loop! When you've made the seam, fold everything the right way 'round and press it down. 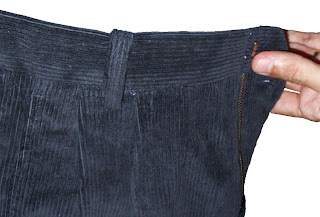 The last thing to take care of is the belt loop. Sew the bottom tack in place, and then sew down the top edge. One half is now complete -- all that's left to do is the exact same thing for the other side. 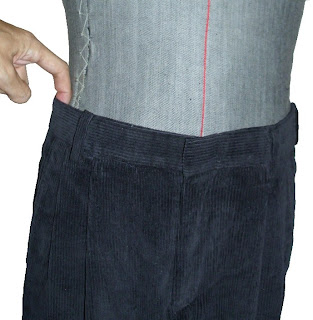 Here's the pair after the alterations; it hangs correctly now, and I can just barely get a finger in the waistband -- as it should be. 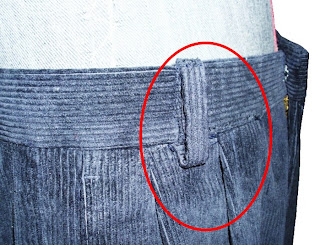 As you can see, the alteration is very nearly invisible. The seams in the waist are hidden behind the belt loops, and the extra width in the leg is tucked into the pleats. As I mentioned last week, when altering anything, a major consideration is where the extra stuff goes. In this case, it's all doubled up just each side of the front center line. Since there's already extra stuff in the pleats, adding a bit extra is not a problem -- as long as it's only a couple of inches. You can't tuck much more up there, since the pleats will get too deep, and may start to billow out at the front thigh. The side seam, too, needs to run straight up the outside leg: too much taken out up front, and the side seam may start leaning forward, which looks awkward.

The other obvious place to remove extra girth is right up the back seam, between the rear pockets...but that is a tale for next week. Stay tuned!

Click here to go to the next essay chronologically, Part Four of The Island of Misfit Clothes.

Click here to go back to the previous essay chronologically, Part Two of The Island of Misfit Clothes.