But What Of The Oscars?

(Part Four of the series "Dressing the Average Guy.")
Chapter 4
It's Oscars week, so you might have joined in this week thinking I was going to cast a critical eye on the Oscars. You'd be forgiven for thinking that: it's a pretty common thing for red-carpet awards celebrations to be followed up by the sartorial love-it-or-hate-it gabfests. And you'd be right: ordinarily I'd be right there among the fray, slashing and burning what passes for formal wear among the Hollywood glitterati -- but not this time! Fear not, though -- as the months roll on, there will be plenty of opportunities to wade hip-deep in awards media of all sorts.


It does bear mentioning, though, that formal wear has a fairly rigid set of standards, so it's very easy to do perfectly well, if you know the rules. If you don't know the rules, though, there's a million ways to get it completely wrong. Here's one example of right and wrong, in Goofus and Gallant fashion, just because I can't help but indulge myself a little. 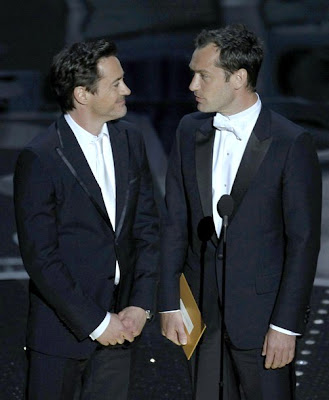 The ne plus ultra of formal wear is knowing the rules so well, you are able to bend them just enough and no further, and turn your attire into something transcendental. But I will go no further than this just now. Frankly, you're not ready. We're just getting into the meat of your everyday wear, O My Average Guy, the wee formative stages of your transformation; and black tie is a specialized, rarefied world that would only get in the way of your development and cause undue confusion, were I to mention it now.  We will get into the details, trust me...but it will come in time.


If we take anything away from the Oscars, let it be this: the rules for formal wear -- and by extension, any sort of clothing -- become rules through decades, and sometimes centuries, of tradition. But there is a limit to how far backward you can look before clothes cross the line into costume. For our purposes, i.e., Dressing the Man of the Twenty-First Century, (in other words, you,) we need reference no further back than the first quarter of the Nineteenth Century.


Does that sound like we're peering too far back in the dim mists of time for any sort of modern relevance? Allow me to elucidate with a brief history lesson. For most of recent recorded history, clothes were pretty much worn right off the looms on which they were woven. A toga or kilt was simply a length of cloth, draped, pleated, folded, and fastened. Double it over, cut a hole for the head, and sew it up the sides, and you have tunics, cassocks, robes, and such. By the time the Dark Ages rolled around, clothes-making had advanced to where the clothes fit the shape of the body, but were still based basically on the drape of a tunic. Later improvements through the Middle Ages and the Renaissance were mostly concerned with fashion.


It's all an interesting study for the history wag, but today, for our purposes, we have no need for discussion of frilly shirts, ruffled collars, or powdered wigs, nor obsolete items like hose, breeches, jerkins, doublets, slashed sleeves, cloaks, or hauberks. No, it wasn't until the 1830s that the die was cast that has lasted for two hundred years: the development and use of the modern trousers, shirt, waistcoat, and jacket. This tried-and-true combination has stood the test of time, being continually refined and improved, but never substantively changed.

Take a suit of clothes of 1850, 1900, 1950, and 2000, and the changes through all that time are those of fashion alone. Widths, lengths, proportions,  details, and fabrics change slightly decade by decade, but the essential underlying style, and in fact even the essential method of construction, remains rock-solid.


When fashion becomes more important than style, things go sideways quickly, so it becomes very important to understand just what Classic Style is: the ultimate advancement of scientific cutting and tailoring techniques and materials, honed over centuries, that fits and complements the figure itself. The application of fashion without Classic Style will always look "off," although you might not presently be able to quantify just why. Classic Style without fashion, on the other hand, is like a boat without a rudder. Once you understand the concept, you will find a world of freedom within the framework of Classic Style, and be assured that anything you wear will work for you and not against you. So at our next meeting I will demonstrate just what exactly makes Classic Style so perfectly suited to the human form, and help you make some formative decisions about the application of said Style to yourself, your personal fashion, and your wardrobe decisions!

Click here to go to the next essay chronologically, Part Five of Dressing the Average Guy.

Click here to go back to Part Three of Dressing the Average Guy.

Click here to go back to the beginning.
Posted by Mr Thompson at 4:39 PM