Taking Stock of the Cravat

(Part 2 of the series,  "The Secret Life of the Tie.")
Chapter 80
Last week, we left our brief history of neckwear at the tail end of the eighteenth century. In the 1780s, the standard 'tie' was the stock, a simple gathered muslin rectangle that fastened at the back of the neck, over the shirtcollar, and had been the going fashion for nearly a century. They were directly related to the high, stiff, black, horsehair neck stocks worn by the military, but were unstarched, lighter, and a good deal more comfortable. They started as tall as the collar itself, but toward the end of the century stocks had grown progressively lower, and the collar was starting to turn over the top of the stock.

If history had progressed in a straight line, we would have a much different take on the 'tie' today...but there was a new fashion on the horizon, born of the American and French Revolutions, and due in no small part to a man named George Bryan 'Beau' Brummell, and a group called the Dandies.

The short version of the story is, Brummell and his ilk nearly single-handedly turned the direction of male fashion away from silk, lace, and gold embroidery; to a new aesthetic of immaculate tailoring, exactitude of fit, sober colors, and plain fabrics. The whole story can easily be found elsewhere with much more detail and anecdotal interest than I can supply here; I shall keep the focus, for now, simply on ties.

Brummell's contribution to neckwear was no small one, for he is responsible for abandoning the stock in favor of the cravat of a century earlier, and more importantly, introducing to it the starch of the Elizabethan ruff. The unkempt folds and wrinkles of the white muslin stock were at odds with the crisp lines and clean tailoring of the Beau's shirts and jackets, so the lines of the neck-cloth were streamlined and smoothed as well, with stiffly starched white linen, carefully arranged with precise creases and artful knots. The new look was futuristic, optimistic, and exciting. There was quite a stir around the invention of many various recognizable styles and knots, each of which had a name and a proper procedure for its correct arrangement.

In 1818, a satirical pamphlet was published called Neckclothitania; or, Tietania: Being an Essay on Starchers, by One of the Cloth. In addition to being the first printed instance of calling a cravat a "Tie," which alone is enough to warrant its immortality, it is an interesting view into the author's opinion of the "Starchers" of the time. It is also a darn good read in its own right: tongue-in-cheek and highly entertaining.

As there can hardly be a better source for describing the Starchers of the Regency era than a first-hand account, here is the book itself, with its frontispiece plate illustration, for your perusal:

It is worthwhile to pay particular attention to the various styles and their construction; as many of them have a direct lineage to the styles of neckwear worn today.

Another small book has been printed by H. LeBlanc in 1828, called The Art of Tying the Cravat, which is a more scholarly take on the Starcher -- an instruction manual, in fact, that teaches 32 different styles in sixteen lessons. Bookending the lessons are some very keen observations that are worth a read. The shame of this book is, although the text is readily available online, the four multi-fold engraved illustrated plates are not. As the plates are key to understanding the instructions, the bulk of the book suffers without them. (Fortunately, several of the styles are illustrated in Neckclothitania, and several more can be intuited from logical derivation.) You need not be deprived of the engraved plates, though! Thanks to the Rubenstein Library's Special Collections at Duke University, which has a copy of the book in its stacks, I have been able to obtain digital images of the plates...so you can read the full text with the illustrations.

Of note here is the mention that black cravats are most commonly worn by 1828, although bright colors and patterns were "undress:" worn at home, in the morning, and for leisure activities. Pure white was (as today) considered most formal. Note also the mention of the use of whalebone stiffeners for some cravat designs -- a sign that, similar to the Elizabethan supportasses and cartwheel ruffs of 1590, the limits of starch were beginning to be reached.

If you are interested in a closer look at these two important books, I have re-edited them slightly, including the illustrations in-line at convenient locations and translating the French and Latin quotes therein.
You can jump ahead and read them in Appendix 1 by clicking here.

The era of the elaborate Starcher came to an end, thanks primarily to the demands of the Industrial Revolution. By the first quarter of the nineteenth century, the popularity of the time-consuming and overly fussy cravats was waning -- businessmen didn't have the time to spend on them; and new factory workers' coal-effused and flywheel-spun environments weren't condusive to wearing them. In its place, a return to the stock; in the form of pre-tied cravats that fastened at the back of the neck. Darker colors became vogue, the collars loose, soft, and high, falling over cravats adorned with all manner of bows. Some were still hand-tied, but an increasing number of men were discovering the ease and simplicity of neckwear that didn't have to be tied at all.

The death-knell of the starched cravat was sounded as early as 1827, with the invention of the detachable shirt collar. Re-invention, actually, since we know from last week that it was presaged by the detachable Elizabethan ruff. The starched detachable linen collar was yet another time-and labor-saving device: it saved housewives laundering time and effort, extended the life of the shirt, and it stayed in place and looked good all day with little care. It looked so good, in fact, that by mid-century, it started to take center-stage over the cravat itself, folding over and hiding everything of the cravat save for the bow. Stand collars were popular for their simplicity, but the collar and the cravat had begun to change places -- the collar on the outside, the cravat underneath; the arrangement with which we are all familiar today. The cravat eventually dwindled to a narrow neckband under the collar, that merely served to form the frontal bow.

Three things happened to change the tide of neckwear in 1861:

The death of Prince Albert ushered in the Great Victorian Gloom, the Blackening of just about everything for the next half-century. Clothes got a great deal more monochromatic, and the only acceptable cheeriness of white details in one's clothing suddenly achieved a new importance.

1861 was also the advent of the paper collar. Born of wartime necessity, it became quite popular. The attraction of a completely disposable item that never needed washing, every morning a completely new collar, was irresistable. They were worn nearly universally, from gentlemen, to bankers, to the working-man, and were made in countless styles. Innovation begets innovation, and mad-scientist tailors developed ties to match the forward-thinking collars. Let's look at a few patent designs, just to get an idea of the variety of futuristic ideas that were in circulation.

Many of them were similar to this design for a pre-stitched bow that simply buttons directly to the front of the collar: 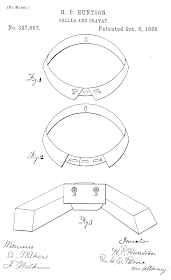 Or this even easier-to-wear design for a pre-made bow that pokes through slots in the collar: 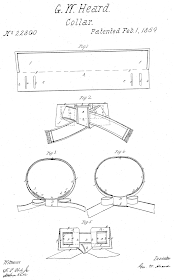 The logical extension of a paper collar was a paper tie, like this one that attached to the front shirt-stud:

And how about this idea, which dispenses with the idea of the bow altogether, and deconstructs the tie into an extension of the collar itself: 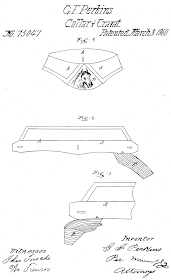 The innovation of the era knew no bounds. Here is a rather brilliant idea for an easily-adjustable and washable bow tie that utilizes both front and back collar studs to secure it: 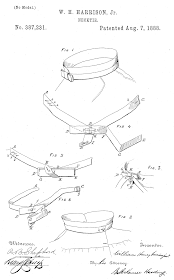 We'll conclude with another really neat idea; a convertible tie that can be made up like a cravat or a bow: 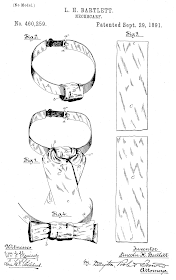 By the 1890s, the paper collar craze had played itself out, and starched linen detachables came to the forefront again. With them came a new tie style; the four-in-hand long tie. It was quick and easy to tie, and complemented the tall, close-set collar points of the era. By the new century, the long tie was far and away the most popular style of neckwear. Bow styles were taking a back seat in popularity.

Next week, we'll look at what became of all these cravat styles, and what survives in the present day.

Click here to go to the next essay chronologically, Part Three of The Secret Life of the Tie.

Click here to go back to the previous essay chronologically, Part One of The Secret Life of the Tie.